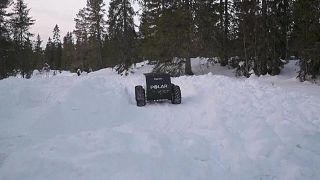 Amid increasing global temperatures and rising sea levels, Antarctica is one of the most affected regions by the climate crisis.

According to British Antarctic Survey (BAS), the temperature of the Antarctic Circumpolar Current (ACC) - one of the most important ocean currents and the only one to flow around the entire world - is rising more rapidly than the global ocean as a whole.

Despite the continent’s role as our Earth’s global climate system, research projects in icy Antarctica have been carried out by "large fossil fuel-powered vehicles".

A group of Dutch students from the Eindhoven University of Technology, however, have devised an electric rover to tackle this issue.

"Currently there is nothing like our vehicle existing in Antarctica, and there are no electric vehicles in this environment," Laurenz Edelmann, the manager of Team Polar, the creators of the vehicle, said.

"We want to transition away towards a more electrified transportation system on the continent".

The “Ice Cube” is designed to collect climate data in Antarctica on solar power.

Ready for Antarctica in a few years

The team was keen to see how the batteries were able to cope with low temperatures and gained insights on what parts could not withstand these conditions.

Team Polar started with just six volunteers with technical support from the Eindhoven University of Technology. Most of the funding was brought in by sponsors and part manufacturers.

At first, the students weren’t sure if they could build a vehicle from the scratch.

"I thought it was quite impossible to do something… but evidently, I was proven wrong at many turns, which is what has made this all process very exciting," Jord Sieben, Solar Energy sub-team manager at Team Polar, said.

Team Polar now has 27 active members and is working to make the "Ice Cube" autonomous.

Ultimately, it will be able to carry out independent research in icy and harsh conditions at the South Pole.

However, the team says the vehicle won't be ready to be tested in Antarctica for another few years.

What life will be like inside NASA's new Moon buggy