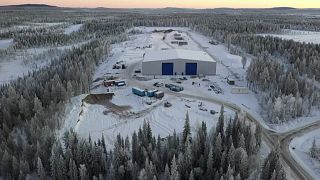 The race to put satellites into orbit from Western Europe is heating up.

Just days after a failed UK satellite launch, Sweden on Friday inaugurated its own new launch site in the Arctic, from which it hopes to see the first satellite blast off by late March 2024.

They emphasised how the spaceport could help the EU tackle climate change and bolster its security and defence capabilities.

"This spaceport offers an independent European gateway to space," von der Leyen said, describing how space research had "enormous potential" to improve our daily life, from measuring the effects of climate change to tracking natural disasters or monitoring road traffic in real-time.

Small satellites are also important to Europe's security, von der Leyen added, noting how Ukrainian forces use them to track the movement of Russian troops.

"Europe has its foothold in space and we will keep it," she said.

While 2022 has been an exceptional year for space exploration, it has been marred by growing tensions with Europe’s biggest space partner, Russia.

According to experts, it has become easier in recent years to send satellites into orbit thanks to their smaller sizes and cheaper prices compared to a few years ago - and Europe is now looking to capitalise on it.

As it strikes out on a more independent path, the Esrange Space Centre has become the leading prospective candidate for Europe’s first satellite launch.

Although the European Space Agency (ESA) has a space hub in Kourou in French Guiana, there hasn’t yet been a satellite sent directly from mainland Europe to space.

However, the Swedish spaceport has said it could happen as early as the end of 2023.

Other European spaceports are also in the race. Portugal's Azores, Norway's Andoya island, Spain's Andalusia and the UK's Shetland Islands are all vying for the honour of launching Europe’s first satellite.

"We think we are clearly the most advanced," says Mattias Abrahamsson, Head of Business Development at the SSC.

In this area, we have 5,200 square kilometres where no one lives, so we can easily launch a rocket that flies into this area and falls down without anyone getting harmed.

"In this area, we have 5,200 square kilometres where no one lives, so we can easily launch a rocket that flies into this area and falls down without anyone getting harmed," Abrahamsson says.

Orbiting the North and South Poles is enough for many satellites and in Sweden, like in the rest of Europe, the rockets being developed are "micro-rockets".

These are around 30 metres long, and capable of carrying a payload of several hundred kilos.

"Instead of launching one big satellite, you spread it out over multiple small satellites and that drives the demand," Philip Påhlsson, Project Manager of New Esrange, explained.

In addition, having a launch site close to European clients spares them and their satellites long boat journeys to Kourou.

The satellite industry is booming, and the Swedish state-owned company is in discussions with several rocket makers and clients who want to put their satellites in orbit.

But working in the harsh Arctic climate "comes with challenges," SSC says.

With temperatures regularly dropping to -20 or -30 degrees, special attention needs to be paid to the metals used, which become more fragile in the cold.

Founded by ESA in 1966 to study the atmosphere and Northern Lights phenomenon, the Esrange space centre has invested heavily in its facilities in recent years to be able to send satellites into space.

The new hangar is big enough to house two 30-metre rockets, which are currently under assembly elsewhere.

More than 600 suborbital rockets have already been launched from this remote corner of Sweden's far north, including the Suborbital Express 3, which was launched in November.

In the future, SSC is aiming for payloads of more than a tonne.

Under a project called Themis, Esrange will also host ESA's tests of reusable rockets that can land back on Earth, similar to those used by Elon Musk's company SpaceX.

Where in Europe do people smoke the most and the least?