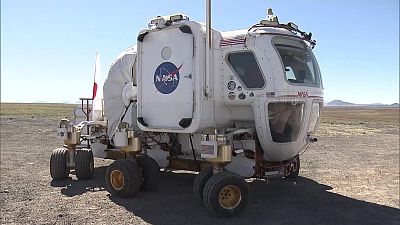 NASA has revealed a prototype lunar rover that could house astronauts when they land back on the Moon for the first time in half a century.

The 3-metre tall and 5-metre long buggy can travel at up to 10 km/h and navigate over rocky terrain.

Inside the rover, which has room for two astronauts, are two beds and a toilet.

NASA says pressurised rovers in which astronauts can live and work are important to establish a "long-term presence" on the Moon as part of the space agency’s future Artemis missions.

It tested the rover earlier this month during a mission simulation called Desert Research and Technology Studies (D-RATS) which brought together six astronauts and engineers from NASA and the Japan Aerospace Exploration Agency (JAXA) in the Arizona Desert.

Among the crew who operated the vehicle during a three-day experiment were Hoshide Akihiko and Kanai Norishige, astronauts from JAXA, which plans to use data from the experiment to eventually develop its own lunar explorer.

According to NASA, the desert in Black Point Lava Flow, Arizona, is ideal for emulating "conditions astronauts will experience near the lunar South Pole during Artemis missions including challenging terrain, interesting geology, and minimal communications".

NASA has previously stated its Artemis programme aims to build a “sustained human presence” on the Moon before it sends the first astronauts to Mars.