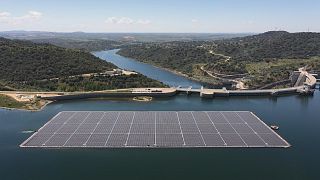 Climate has, as ever, been a talking point at the 2023 World Economic Forum (WEF) in Davos, and discussions have largely rested on the potential impact that new emerging technologies could have in turning the tide for a planet in peril.

Miguel Stilwell, the CEO of EDP, one of the world's leading energy providers and investors in renewable energy, spoke to Euronews Next on the sidelines of Davos about the technologies needed to help combat the climate crisis.

David Walsh, Euronews Next: Key on the agenda here in Davos is the climate crisis and soaring energy prices. How does EDP fit into that landscape?

Miguel Stilwell, EDP CEO: EDP is a global renewable energy company, and so I think it has a critical role to play in this energy transition that's happening. I think that's been actually accelerated now with the war in Ukraine and with this renewed focus not just on the environmental side, but also very much on the question of energy security, energy independence, and also how do we reduce costs. So we've been a player now in the renewable sector for over 20 years investing over this period in various different regions of the world. Europe is obviously our primary market. And so we continue to invest to make sure that we can deliver lower costs, energy security, and also reduce emissions.

Renewable energy is a crucial part of the climate crisis and how we deal with that. What is it doing in renewables that's really noteworthy that we should know?

So, we've been one of the leading players in renewables now for the last 20 years. We invest in wind onshore and also offshore and also solar. And there are several different innovations, I think, that have gone on in the industry over the last couple of years, and we've been at the forefront of that.

In terms of offshore, we have a large portfolio both in Europe, up in Scotland, France, and Poland, but also now in the US on the East Coast, California. So, different technologies offshore are becoming a more and more mature technology. But even within the offshore industry, floating offshore technology is also beginning to get some scale. And we've been at the forefront of that in terms of solar.

We've also been focusing, not just on your standard solar, but also things like floating solar, for example, on dams or in the sea. We have a project in Singapore also sort of floating solar there and then putting these different technologies together. And so, I think EDP has a track record and also trying to use the infrastructure as efficiently as possible, combining wind, and solar batteries on the same interconnection point. And so all of these are different innovations that have happened, and we've been sort of at the forefront of that.

And in Europe too? You recently inaugurated the Alqueva Dam in Portugal. There have been recent problems with droughts in Portugal. How is that helping with that situation and also with energy production in Portugal?

So, we had one of the worst droughts in the last century last year in Portugal. Fortunately, now things have swung the other way. We're actually getting a lot of rain. What we've been doing, though, is not just taking advantage of the dams that we have in Portugal, but we've been putting on solar on those down. ¨

For example, I talked about floating solar. Alqueva is the largest artificial dam in Europe putting floating solar. They're combining it also with wind and all connected to the hydro plant, which is already existing. So you've put three different technologies injecting on the same interconnection point. That's just one example.

Given the climate crisis and renewables being high on the WEF agenda, what message are you bringing to Davos? And are the people here listening to the message that you're bringing?

And that depends on having stable regulatory regimes and having the right price signals and on making sure we can actually unlock all of the potential or the business potential, putting together public policymakers and private initiative to make sure that we can deliver on that. And I really think that's an existential issue that we all need to focus on and bring all of the different stakeholders together to do that.

One of the critiques of Davos is that people don't listen and that collaboration isn't always there. Do you see that happening in renewables and the climate crisis in the future?

Listen, we need to do it and we need to do it faster. Then what has been done? I think sometimes it's frustrating. The pace doesn't feel like it's been fast enough. I'm an optimist. I think we'll get there.

But we need to continue to push the message. We need to make sure that everyone is focused on actually getting things done. So it's not just rhetoric, it's not just words, but that we are actually executing this on the ground with concrete projects, making it happen, delivering cleaner energy at affordable prices for all consumers.

Sony has unveiled a new PS5 controller designed for accessibility