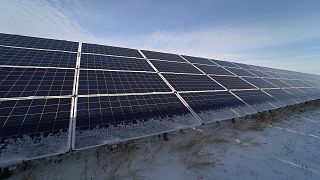 Europe is attempting to shake off its dependence on Russian gas by ramping up its renewables industry, specifically solar power.

Solar is seen as crucial to Europe's energy security, climate goals, and jobs. Europe installed a record-breaking 41.4 gigawatts of photovoltaic power in 2022 -- a rise of 47% compared to 2021-- according to industry group SolarPower Europe.

Figures from the Paris-based International Energy Agency predict that up to 95% of the solar industry could be concentrated in China by 2025.

Burghausen in Germany is the home of Wacker Chemicals, one of the world’s leading manufacturers of polysilicon -- the raw ingredient for solar panels.

"We're really what we call an energy-intensive industry," Tobias Brandis, President of Wacker Polysilicon told Euronews. "You just should imagine that here and at our second site in Saxony, we use about 0.7 to 0.8% of the German electricity demand, which is absolutely huge.

While Wacker is one of Europe's leaders in polysilicon, the vast majority is produced elsewhere in China.

"China really took action there. They took this as one of the industries which is going to be very strategic and they very strategically invested into this industry," Tobias Brandis explained.

"Europe, and the same is actually true for the United States, just did not compete in speed, but also in respect of, let's say, production conditions."

As part of its broad strategy to address this, the EU has set up the Solar Alliance, bringing together businesses and stakeholders to increase production capacity, promote investments and diversify supply -- establishing a Made in Europe industry.

Speaking at the launch, EU Commissioner for the Internal Market Thierry Breton talked of a 'green paradox', in which solar energy is essential for decarbonisation and energy independence but where Europe is heavily dependent on China.

In France's south-eastern city of Grenoble, French startup ROSI deals with the other end of the solar chain -- recycling.

The rise in solar panels installed over recent years will be mirrored by a rise in panels soon reaching the end of their life. This represents a huge challenge for the recycling industry.

"We will be able to recycle up to 3,000 tonnes of solar panels, so that's about 100,000 panels which can be recycled each year," Antoine Chalaux, General Manager at ROSI told Euronews.

"But tomorrow it won't be enough to recycle 3,000 tonnes, we will have to recycle tens of thousands of tonnes because in France the stream of waste will continue to grow," he revealed.

This is leading to an explosion in the number of solar panels across Europe that will soon need recycling.

ROSI has developed a way of extracting the most valuable elements from a solar panel -- silicon and silver -- using pyrolysis to unglue the different pieces. A triage process separates the photovoltaic cells from the glass and a chemical wash detaches the silver.

ROSI is also scaling up, with a factory opening shortly in La Mure.

Along with the single market, Europe sees sustainable innovation like this as a means to become more resilient and globally competitive.

"Recycling is an area where Europe excels and Europe still leads in this area," Antoine Chalaux explained.  "If we want to rebuild an efficient photovoltaic industry in Europe, on a large scale, recycling these materials will make our industry more competitive."

With the climate, energy security and jobs at stake, it is vital Europe is able to re-ignite its solar power industry.