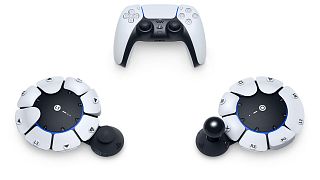 How to ensure that a video game is accessible to people with disabilities? Sony believes it has the answer, having unveiled a customisable “controller kit” for its PlayStation 5 designed to help players with disabilities.

The controller, introduced this week as “Project Leonardo” during CES 2023 in Las Vegas, is round-shaped and designed so it can lie flat on a tabletop or a wheelchair tray.

In addition, the buttons come in different shapes and sizes.

“I am excited that the design will be completed through collaboration with players rather than presenting them with a single form factor,” So Morimoto, from Sony’s design team,wrote on the company’s blog.

In the post, the company said it collaborated with different organisations, such as AbleGamers, SpecialEffect and Stack Up, in order to design and create the controller.

The initiative by Sony - who created video game franchises such as The Last of Us, God of War or Uncharted - has so far received very positive feedback on social media.

“I'm almost in tears because the arthritis in my hands is getting bad and so are many other joints in my body and gaming is starting to be a challenge,” said one user in response to Sony’s video on YouTube.

“As someone who had a stroke in July and has only tried gaming twice since then because of frustration with trying to use the traditional controllers, I am super excited,” another said.

Several initiatives in the gaming industry

The gaming industry has faced closer scrutiny regarding accessibility in recent years.

It is increasingly being taken seriously by the video game studios and the developers: from better visibility of disabled people through games such as “Extreme Wheelchairing” as well as a more-thought design, like a new controller.

“Project Leonardo is a product we’ve been developing for years, with the goal of making something that is truly unique and caters to a wide range of players with different physical needs,” said Jim Ryan, PlayStation president and CEO in an exclusive interview to WIRED.

In 2015, the French studio Dowino launched A Blind Legend, a fully audio video game to play on mobile or computer. In 2021, The Vale: Shadow of the Crown was released, promising “a 3D audio experience” with haptic feedback when played on Xbox.

Industry guidelines have been developed guidelines were developed by the industry and developers added multiple accessibility features, for example, a colour-blind mode.

Flying cars and karaoke: The best concepts and auto tech at CES 2023