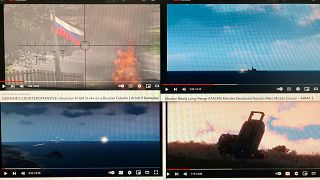 Soldiers clashing in burnt-out cities, warplanes being shot down by missiles, drones blasting tanks: these images look life-like but are actually taken from war video games like "Arma 3". And they are feeding the flow of misinformation.

Clips from the game - often with "Live" or "Breaking news" banners added to make them look more authentic - have frequently been used in fake videos claiming to have been captured during the Russian invasion of Ukraine.

The ease with which they deceive the public, and sometimes even television broadcasters, has become a source of concern for researchers. It is "a reminder of how easy it is to fool people," Claire Wardle, co-director of the Information Futures Lab at Brown University, told AFP.

"With the improvement of video game visuals, computer-generated images may at first glance appear to be real," she explained.

"We need people to know how to check the veracity of these images, especially how to look at the metadata, so that these errors can be avoided, especially by the media".

Underneath images of Arma 3 titled "Ukraine's counteroffensive!", for example, one misled Internet user commented, "We need to ask Ukraine, after this war, to train NATO forces".

"While it is flattering that Arma 3 simulates modern conflicts so realistically, we are unhappy that it could be mistaken for real combat footage and used as war propaganda," a studio representative said in a statement.

"We are trying to combat this content by reporting it to platforms, but this is not effective at all. For every video that is unpublished, 10 more are uploaded every day".

AFP has uncovered several of these videos, including one in November purporting to show Russian tanks being hit by Javelin missiles which has been viewed tens of thousands of times.

According to Bohemia Interactive, these hijackings have seen a resurgence in popularity with the invasion of Ukraine, sometimes dubbed the "first TikTok war" because of the many images that illustrate it on social media.

Some media outlets have also been fooled: in November, Romanian channel Romania TV broadcasted an old Arma 3 video reportedly showing fighting in Ukraine, and both a former defense minister and a former intelligence chief commented on the images as if they were authentic.

In February, another Romanian channel, Antena 3, mistakenly broadcast an old Arma 3 video and invited the Ministry of Defense spokesman to analyse it.

On social media, the reasons for sharing these fake clips vary.

"I suspect the people posting this content are simply ‘trolls’ wanting to see how many people they can trick," Nick Waters, of the digital investigation site Bellingcat, told AFP.

Those who then re-share these publications are according to him "naive people" trying to get visibility or subscribers on the Internet.

Given the unsophisticated nature of the disinformation based on the Arma 3 clips, it is unlikely that it comes from state actors, researchers say.

For them, the clips are easier to verify than "deepfakes," which involve using artificial intelligence to create confounding images of realism, increasingly employed in the criminal underworld.

"If you know what to expect, these (Arma 3) videos are actually not that hard to identify as fake," adds Waters. Unfortunately, "many people don't have the skills" to spot misinformation.