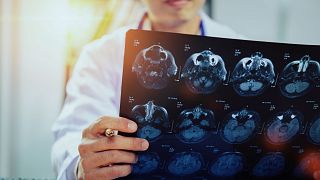 The use of artificial intelligence (AI) technology has helped to triple the number of patients who recover from a stroke in England.

Early-stage analysis of the Brainomix e-Stroke system technology, which has been rolled out in a number of stroke networks in the country, found it can greatly cut the time between diagnosis and treatment.

This is a critical window of time in an extremely time-sensitive diagnosis.

More than 111,000 suspected stroke patients have so far benefited from the system across five stroke networks in England.

Early results show it can slash the time between being seen by a doctor and starting treatment by more than an hour, while the share of patients who recovered with no or only slight disability soared from 16 per cent to 48 per cent.

Using AI, the system diagnoses and determines the best treatment for patients who suffer a stroke, providing real-time decision support in the interpretation of brain scans.

By showing stroke specialists scans and images remotely and securely, it means they can conduct their job efficiently, supporting other hospitals in delivering diagnoses and treatments.

The specialists come from all parts of the stroke pathway, allowing more people who suffer from a stroke to receive specialist care, from pre-hospital, to hospital discharge, to after care.

Around 85,000 people in England are affected by strokes each year, and worldwide that number is around 17 million, according to Safe Stroke EU.

A stroke occurs when the blood supply to the brain is blocked - called an ischemic stroke - or if a blood vessel in the brain ruptures, which is called a haemorrhagic stroke.

Either type causes brain cells to die or become damaged, meaning a quick treatment response is crucial for a better chance of recovery.

‘This technology is just amazing’

One patient who benefited from the new technology, Carol Wilson, was taken to hospital in 2021. She was quickly diagnosed, and was recommended a thrombectomy, the surgical removal of a blood clot.

“This technology is just amazing. I was able to sit up and text my family later that day, and was back at home and able to walk around two days after having a stroke,” she said.

“I often think about how lucky I am to have made the recovery I have - to be able to go back to work and spend time with my grandchildren - especially when you consider not everyone who has a stroke has such a good outcome.”

Earlier this year, Brainomix e-Stroke was awarded a national tender in Hungary, to be rolled out across all the stroke centres in the country.

The five-year programme is funded by the EU4Health scheme, and was the first time a single stroke AI imaging platform was deployed across an entire country.

The system is up and running at sites across 11 stroke networks in England, five of which were funded by the AI in Health and Care Award.

This award supports accelerating the testing and evaluation of cutting-edge technologies which have the potential for greatest patient and clinician benefit, improving patient outcomes and freeing up valuable clinician time.