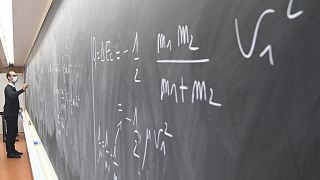 Technology has made learning from anywhere a reality. Courses, coaching, and assessments are now being delivered to every corner of the planet -- serving millions of students simultaneously. And while the desire for quality education and reputable qualifications has not changed, the business landscape has.

Research by the World Economic Forum earlier this year forecasted a future for education that looks very different from the world of traditional lecture halls and formal end-of-year exams.

Studies have also found that traditional lectures alone can be ineffective and inefficient ways of teaching, compared with digital experiences that allow more interaction and problem-solving practice.

The death of final exams?

Many universities are starting to ditch standardised tests, due to concerns that the ‘big final exam’ isn’t an accurate reflection of a student's true competence.

Opting for a more practical, hands-on approach to learning, Northwestern University in Qatar is kitted out with the latest communications technology and first-class facilities, such as 'The Forum', where staff and students from 60 different countries can connect and congregate.

The campus is also equipped with a state-of-the-art newsroom, making it hard to believe that you’re in a university and not the newsroom of a major media organisation.

Euronews spoke to the Dean of Northwestern University in Qatar, Marwan Kraidy, about this trend towards real-life learning.

"I think it’s very important to the media sector. We are part of a very established United States tradition, the liberal arts tradition", he said.

"Now, of course, the actual learning, the experiential learning is crucial. Because you can no longer send somebody to a media organisation who has no clue at all about the technology. Does it work? Sometimes, rarely. But the technology has become so complicated, the skills have become so multiple that there’s an expectation that even a beginner professional needs to have some skills in addition to their theoretical, didactic, type of education. And I think that’s everywhere", Dean Marwan Kraidy said.

As hands-on learning and teaching from anywhere appear to be shaping the future of the sector, companies are looking to capitalise on these new trends.

Barco, in the town of Kortrijk in Western Belgium, is one such company. They're trying to use their classroom technology to spread education as widely as possible.

Classrooms and training sessions online have become a staple of schools and businesses in the post-pandemic world. But hundreds of educational institutions globally have brought in a Barco studio in an attempt to boost engagement.

"As a trainer, as a professor, you really have a very close contact with your remote audience", explained Jan Van Houtte, Vice President of Barco weConnect. "You see all of them. When somebody is distracted, you will be able to notice it and to interact with it, creating a completely different dynamic."

There's a broad range of tools: Q and A sessions, polls, and visual aids. Business schools especially appear to have adopted remote learning as a norm now -- and it's big business for Barco.

Barco started as the Belgian American Radio Corporation. Founded in 1934, they made radios coming from the United States. The firm also has tailor-made studios so that surgeons around the world can follow each other in the operating theatre live.

"One of the use cases we focus on is assisting the surgeon", Johan Fornier, Executive Vice President of Surgical & Modality at Barco told Euronews. "So with a remote expert helping the surgeon, aiding the surgeon and giving him remote assistance. But the other use case which is popping up now really quickly is remote training, remote education."

They say this is just the beginning of what they're doing -- not just education to teach, but also to save lives.

Another organisation working to achieve those goals is JA Europe. They’re the largest provider of education programmes for work readiness, financial literacy, and entrepreneurship on the continent.

Euronews asked the CEO of JA Europe, Salvatore Nigro, how all of this can help shape the future of Europe.

"Imagine that while we're talking right now, 370,000 young entrepreneurs are going to our company programme. Those will be eventually the unicorns that Europe needs to rebuild the economy. If we really want to rebuild the economy, we need to look at the traditional sectors, definitely. But we're looking at the future", he said.

"We really need to imagine what is going to be the world of work for those young people. So we are reversing the engineering. We're looking at what the jobs are. We are disaggregating the skills. We're training the young people to be successful entrepreneurs or getting a successful job", Salvatore Nigro added.

Elsewhere, the European statistics board has released wage growth data for the third quarter. As the cost of living soars across the region, experts are concerned that wages aren’t being raised fast enough to catch up with inflation. But companies like Stellantis and LVMH have vowed to hike wages and pay one-off bonuses to help employees cope with a tough winter.

The Bank of Japan has announced its interest rate decision. Despite inflation hitting record highs, the central bank has been reluctant to raise interest rates, saying the country’s fragile economy still needs monetary support in the form of ultra-low interest rates.

Meanwhile, US food conglomerate General Mills reported its second-quarter fiscal results. The owner of household brands like Betty Crocker and Nature Valley has been delivering strong earnings this year, raising its full-year forecast in the previous quarter. But uncertainty around consumer sentiment, inflation, and supply chain disruptions could cloud the rosy outlook.