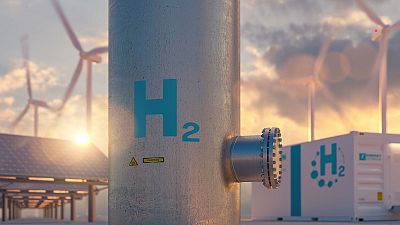 Since Russia invaded Ukraine, the spike in gas prices has caused green hydrogen to suddenly seem much more affordable than it previously was.   -   Copyright  Canva
By Natalie Huet  •  Updated: 24/11/2022

It’s become all too clear how Russia’s invasion of Ukraine caused natural gas prices to jump, leaving millions of Europeans struggling with sky-high energy bills and further pressuring governments to help out and support alternative sources of power.

Nine months into the war, there is a silver lining to the crisis when it comes to the continent’s energy future.

The spike in gas prices has caused green hydrogen – made exclusively with renewable power – to suddenly appear much more affordable than it previously was, driving investment and interest in a sector that could help the bloc slash its carbon emissions.

Analysts and industry players say it’s welcome news, but we shouldn’t rejoice too much, either, as this shift largely means all types of energy are costly these days, and there’s still a lot Europe needs to do to build a competitive green hydrogen economy.

“We still have to do our homework to get the manufacturing scaled up and then improve the technology to make it more cost-competitive,” Stefano Innocenzi, head of the New Energy Business at Siemens Energy, told Euronews Next.

“So, the challenge for us remains the same. We need to work on getting the costs down”.

Hydrogen, a highly combustible gas that can store and deliver energy, is the simplest and most abundant element on Earth, but it doesn't typically exist in its free form and must be extracted from compounds that contain it, such as water, coal, natural gas or biomass.

Hydrogen has long been used as rocket fuel, in oil refining, to produce ammonia for fertilisers and to make steel and chemicals.

But producing it usually relies on natural gas or coal, in processes that emit large amounts of carbon dioxide. This type of fossil-based hydrogen is commonly referred to as “grey” hydrogen.

Industry experts estimate that close to 95 per cent of hydrogen production currently uses fossil fuels, and it generates as much CO2 as the emissions of the UK and Indonesia combined.

“Green” hydrogen, by contrast, is produced by splitting water into its two components – water and oxygen – using electricity from renewable energy sources, such as wind and solar.

Experts say this type of “clean” hydrogen could replace fossil fuel in sectors struggling to slash their carbon emissions because they can’t easily switch to electricity – think heavy industry, like steel making, or heavy transport.

In fact, if the world is serious about reaching carbon neutrality by 2050, hydrogen use across the G7 could jump by four to seven times by the middle of the century compared to 2020, according to a new report from the International Renewable Energy Agency (IRENA).

The European Commission adopted an EU hydrogen strategy in July 2020 and it now estimates that the share of hydrogen in the EU’s energy mix could reach 13-20 per cent in 2050.

Another type of hydrogen is “blue” hydrogen, which is still based on fossil fuels but applies carbon capture and storage technology to remove these emissions from the air.

This method could make it relatively easy to retrofit fossil fuel infrastructure with carbon removal technology.

On Tuesday, for instance, TotalEnergies and AirLiquide announced they were teaming up to convert Total’s former oil refinery site in Grandpuits in central France to create a “biorefinery” producing renewable and low-carbon hydrogen, mostly for aviation fuel.

Some industry experts have argued that blue hydrogen could in this way be a stopgap to reducing carbon emissions before green hydrogen really takes off in the coming decades.

But the war in Ukraine may have fast-tracked this timeline somewhat.

‘Too cheap’ to ignore

Since Russia began its invasion of the country in February, the cost of natural gas prices has soared by more than 70 per cent on international markets, causing the cost of both grey and blue hydrogen to jump.

While these prices have now eased slightly, the post-war spike has virtually put the average cost of grey hydrogen on par with that of green hydrogen, at around $5/kg (€4.8/kg) in Europe, according to Kofi Mbuk, a senior cleantech analyst at the think tank Carbon Tracker.

In just a few months, the Ukraine war also sparked $73 billion (€71 billion) in fresh investment in green hydrogen, he wrote in a recent report on the topic.

The European Union has launched a €3 billion green hydrogen bank to support the sector, while the United States introduced a massive tax credit of $3/kg to the production of green hydrogen via its Inflation Reduction Act (IRA).

The US move has proved a remarkable boon, driving the cost of new green hydrogen products below $2/kg, to the point where it becomes “too cheap” to ignore, Mbuk told Euronews Next.

Siemens Energy’s Innocenzi said his unit was seeing more business since the war in Ukraine – but more so in the US than in Europe.

"What moves faster is the US. With the IRA we see a significant push of US companies to secure capacity and that I think is very good for us,” he told Euronews Next.

Bringing hydrogen ‘from niche to scale’

“Hydrogen can be a game changer for Europe. It is key in diversifying our energy sources and helping us reduce our dependency on Russian gas,” Ursula von der Leyen, the president of the European Commission, said in September when unveiling the EU’s new Green Hydrogen Bank.

“We need to bring this niche market to scale”.

If clean hydrogen is still a niche market these days, it’s because some important factors are still preventing it from becoming an attractive and sustainable alternative energy solution.

A key one is renewables; for green hydrogen to truly scale up, it needs a vast and reliable supply of affordable renewable power such as wind, solar or tidal energy.

“We need to shorten the approval processes for renewable projects. We need to build the infrastructure for both hydrogen and power distribution,” Innocenzi stressed.

The two firms are currently working on a commercial offshore wind turbine that produces hydrogen via electrolysis.

That project would mark a breakthrough in the production of renewable hydrogen – if its developers find a way to desalinate the water that goes into the electrolyser to produce hydrogen, as well as solutions minimising the need for offshore maintenance.

Innocenzi said the plan is to try the technology onshore and then move it offshore, with a deadline to build the first such wind-to-hydrogen turbine in Heligoland, a small German archipelago in the North Sea, sometime in 2025 or 2026 at the latest.

Another reality is that Europe is unlikely to produce enough green hydrogen on its own to reach net-zero emissions.

It will need to import part of it from places with the available land and weather conditions needed to produce renewable power – like Australia or parts of Africa and Latin America, and the usual energy producers of the Middle East which also have a high potential for solar power generation.

To import and dispatch this hydrogen, Europe will need to invest in infrastructure.

The good news is that existing pipelines and terminals being used for natural gas could in part be repurposed for hydrogen, Noé van Hulst, Hydrogen Advisor at the International Energy Agency (IEA) and advisor at Gasunie, a Dutch gas company, told Euronews Next last year.

Last but not least, the manufacturing of electrolysers - the technology needed to jolt hydrogen out of water - will need to be scaled up to bring costs down.

On that front, Siemens Energy is betting on a new joint venture it formed with Air Liquide to produce proton exchange membrane (PEM) electrolysers on an industrial scale.

Production is set to begin in the second half of 2023 and ramp up to an annual production capacity of three gigawatts by 2025.

As the global race for hydrogen heats up, Innocenzi said there is a risk that just like we’ve seen with photovoltaic panels in China, most of the electrolysers used in green hydrogen projects end up being made outside of Europe.

“We are not yet at the cost level where we have to be. And that's the reason why government support is critical and needed,” he said.

Mbuk, of Carbon Tracker, concurred. “We need a direct outright subsidy plan - some kind of strong subsidy on green hydrogen that drives the price on par to either $2/kg or less than $2/kg,” he said.

“Then the entire sector will be completely competitive. And what that would do is that that would rapidly unlock private finance”.