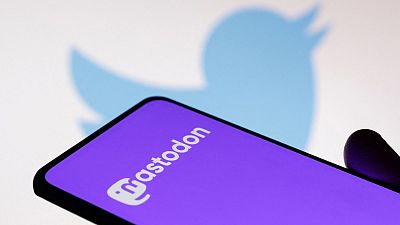 With Twitter in disarray since Elon Musk took control of it last month, Mastodon, a decentralised, open alternative, has seen a flood of new users.

Musk himself has commented on - or rather mocked - the rival network’s surge in popularity on Monday, in a now-deleted tweet saying: “If you don’t like Twitter anymore, there is awesome site called Masterbatedone”.

So, if you’re considering leaving Twitter now that it has a new owner and CEO, and Mastodon is piquing your curiosity, here’s what you need to know.

Mastodon is a free social media network where you can post "toots" (instead of tweets), follow other people and organisations, and favourite (like) and boost (retweet) posts from other users.

But while Twitter and Facebook are each controlled by a single company, Mastodon is installed on thousands of computer servers, largely run by volunteer administrators who join their systems together in a federation.

It’s important to note that because it’s run by volunteers, the platform is free of advertisements.

People swap posts and links with others on their own server - or Mastodon "instance" - and also, almost as easily, with users on other servers across a growing network called the “Fediverse”.

Mastodon is the brainchild of Eugen Rochko, a young German programmer, who sought to create a public sphere that was beyond the control of a single entity.

Still, the jump in Mastodon users in just a matter of days has been impressive.

Before Musk completed his acquisition of Twitter on October 27, Mastodon's growth averaged 60-80 new users an hour, according to the widely-cited Mastodon Users account. This had soared to 3,568 new registrations in one hour on Monday morning.

Rochko started the platform in 2016, when rumours were spreading that PayPal founder and Musk ally Peter Thiel wanted to buy Twitter.

"It's really important to have this global communications platform where you can learn what's happening in the world and chat to your friends. Why is that controlled by one company?"

Mastodon's advocates say what really sets it apart is its decentralised approach.

Rather than go to Twitter's centrally-provided service, every user can choose their own provider, or even run their own Mastodon instance, much as users can e-mail from Gmail or an employer-provided account or run their own e-mail server.

No single company or person, can impose their will on the whole system or shut it all down. If an extremist voice emerged with their own server, the advocates argue, it would be easy enough for other servers to cut ties with it, leaving it to talk to its own shrinking band of followers and users.

The federated approach has downsides, though.

It is harder to find people to follow in Mastodon's anarchic sprawl than on the neatly ordered town square that centrally administered Twitter or Facebook can offer.

How do I join Mastodon?

Since there's no single entrance point, you need to sign up on a specific Mastodon server.

Servers have been set up based on geographic location, subject interest, professional background or pretty much anything quirky an administrator could think of. For example, literary buffs at oulipo.social are forbidden from using the letter "E" - in honour of Georges Perec's novel "La Disparition".

According to CNET, some of the most popular Mastodon servers include mastodon.social - the original instance of the Mastodon project - masthead.social for journalists and fosstodon.org for those interested in tech and open-source software.

But you don't need to worry too much about which server you pick to register - you can join as many as you want, follow people across servers and leave or switch instances at any time.

Most Mastodon servers with open registration will only ask for your email address and a password to get started. Others may ask you to request to join and wait for an invitation - kind of like a private Facebook group with a moderation team.

Free apps like Twitodon, Debirdify and Fedifinder can then help you track accounts you followed on Twitter that migrated to Mastodon.

How do I use Mastodon?

The platform allows you to publish short posts for either a select audience or for the world to see. Instead of tweets, these are called “toots”.

You’ll have almost twice as many characters (500) to write a post than on Twitter (where they’re capped at 280). You can add links, images and videos as well as audio files to your posts, and additional features such as polls and spoiler warnings that require a click before viewing.

You also have more control over who can see your publications, as you can decide whether you want them to be fully public, only for your followers or only for the users you mention in the post.

You can also edit posts on Mastodon - a feature that has been a long time coming to Twitter. But people who reshare your post get a notification once it’s edited, and each version of your post remains available for review.

Hashtags are also used to identify relevant and trending topics, and you can repost someone else’s toot with your followers by “boosting” it – the equivalent of retweeting. But there’s no such thing as “quote tooting”.

Rochko, whose Mastodon foundation runs on a shoestring crowdfunded budget topped up with a modest grant from the European Commission, has found a particularly receptive audience among privacy-conscious European regulators.

Germany's data protection commissioner is waging a campaign to get government bodies to close their Facebook pages, since, he says, there is no way of hosting a page there that conforms to European privacy laws.

Authorities should move to the federal government's own Mastodon instance, he says. The European Commission also maintains a server for EU bodies to toot from.

"No exclusive information should be sent over a legally questionable platform," data commissioner Ulrich Kelber said earlier this year.

Meet the Europeans working multiple jobs to pay their bills