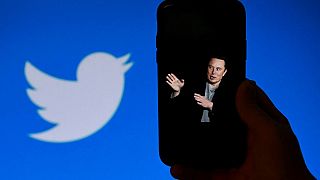 n this file illustration photo taken on October 04, 2022, a phone screen displays a photo of Elon Musk with the Twitter logo shown in the background in Washington, DC.   -   Copyright  OLIVIER DOULIERY/AFP or licensors
By Euronews  with AFP & Reuters  •  Updated: 02/11/2022

The social network already offers a subscription for paid features, but as its new owner, Musk wants to launch a more expensive and more widely adopted service to increase the platform's income.

"The current system of lords and peasants, with those who have the blue tick and those who don't, is bullshit," said the Telsa boss and SpaceX founder.

Musk's offering merges Twitter Blue - an already in place $5-a-month (€5) subscription for a more comfortable reading mode and editing tools - with the ability for eligible accounts to verify and certify their identity with the blue tick.

Currently, only certain profiles can request such authenticity, including governments, companies, the media, and political, cultural, or sports personalities.

Badges can be revoked if they do not respect the rules of the platform.

Reactions from Twitter users were mixed. Some praised the move saying the current system was "unfair" and needed to be changed, while others questioned if verification would work if it could be bought.

Musk, who took over Twitter last Thursday, asked engineers to work tirelessly on overhauling the system.

He said subscribers would have other benefits: their tweets will appear in priority, they will be able to post longer videos and audio messages, and will be shown "half as many ads".

He also offered subscribers a pay wall bypass from "publishers willing to work with us".

The subscription price will be adjusted according to each country's currency.

Musk's comments follow media reports that he was looking at the process of profile verification and how the blue check marks were given. Twitter used to give these to noteworthy profiles based on its own criteria.

More than 80 per cent of Twitter users who took part in a recent poll said they would not pay for the checkmark. Some 10 per cent said they were willing to pay $5 a month.

The richest man in the world has repeated since the start of his eventful $44 billion (€44.4 billion) takeover bid that he would shake up Twitter, saying he wanted to "help humanity".

But concerns have surrounded Musk's past remarks that he would be allowed banned users back onto the platform, such as former US President Donald Trump. No decisions on this have been made public.

Musk indicated in the past that profitability was not his priority.