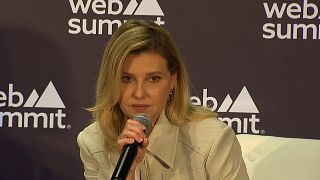 Ukraine’s first lady has urged Russians to watch Euronews and not Russia Today, as she spoke about disinformation being spread about the war in Ukraine and the need for the truth to be shown.

"I can honestly say that it’s very hard for us to talk to the Russians. In a nutshell, watch Euronews, don't watch Russia Today, don't watch first channel, don’t watch Russia channel. And this is already the first step to heal," Olena Zelenska told Euronews Next at a press conference at Web Summit in Lisbon.

The first lady also said social media companies should not hide the content of the victims of Ukraine’s war as sensitive content.

"I have put up the photograph of a girl who was killed by shelling, the girl I knew with a pink pram," she said.

"And it was hidden by social media as sensitive content. I think it's wrong. Do not try to shy from this because this is the truth. And the world should know the truth".

Zelenska added she had not spoken with Facebook or Instagram about hidden content but said, "I think at the moment we can see the double standards when we talk. They talk about the moral values of what has to be hidden and what is sensitive".

Work of the Olena Zelenska Foundation

The first lady was speaking to highlight the work of the Olena Zelenska Foundation, a charity she launched in September with the aim of helping Ukrainians feel mentally and physically healthy and capable of building a future in their home country in the wake of Russia’s invasion.

While in an earlier speech on Tuesday she warned Web Summit attendees that technology was actively being used in the killing of civilians, she also highlighted how her foundation was being used for good.

"There are numerous options for how we can help and use the technology for good," she said, adding one of the main projects of the foundation is prosthetics.

"We, unfortunately, have dozens of children who have lost their limbs due to the explosions, you know, caused by mines".

Zelenska said many operations for prosthetics have happened in the United States, adding she was hopeful that her foundation will be able to finance bionic prosthetics for use in that Ukraine that would allow the mind to control the artificial limb.

"We hope that with the help of the foundation, these operations can be organised better and we can have more of them," she said.

Another way technology is helping the injured is through hearing aids. Zelenska said many have lost their hearing due to shellshock and the foundation has many partners providing special hearing aids.

Another issue close to her heart is Ukraine’s mental health. The first lady has founded a national programme to provide psychological support.

Dealing with trauma caused by the war

"Starting from a boy who had to bury his mother with his own hands to four brothers who saw their parents killed in front of their eyes to a boy who came to the camp and he couldn't talk".

She said the family was called to a courtyard and faced a "Russian firing squad and they were told to say farewell to each other".

She said the Russians shot bullets into the air. The four children are in the support centre and in 20 days, they have “come back to life” after working with psychologists.

But Zelenska noted this was just children who were being treated but there is another massive demographic.

She said the foundation will become more important as winter approaches amid energy blackouts caused by Russian strikes.

"This is a Russian goal to make sure that people suffer not just from fear, but also from cold and darkness," she said.

She urged the world to continue its support for Ukraine even as the war enters its eighth month.

"We understand that people are getting very tired. But you can only imagine how tired Ukrainians are. And when we talk about this fatigue thing, I would like to say that it's the if we surrender to this fatigue or we give up to this fatigue, we will surrender, end of story completely".