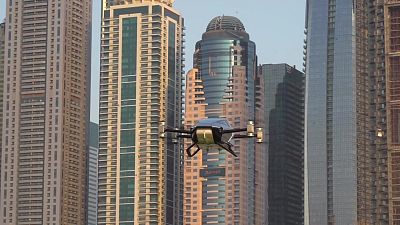 A Chinese-manufactured air taxi has successfully completed its first test flight in public in the United Arab Emirates.

The all-electric vehicle, which weighs 700 kg, is equipped with an intelligent flight control system and autonomous flight capabilities.

The vertical takeoff and landing (eVTOL) aircraft flew with an empty cockpit in the skies of Dubai for 90 minutes on Wednesday.

Unlike planes and helicopters, eVTOL vehicles could offer quick point-to-point personal travel, just like a taxi.

“This is the first step in achieving the dream," said Omar Alkhan, Executive Director of the Dubai Chamber of Commerce and Industry, adding he expects more vehicles like these to be tested in the near future.

The XPeng X2, developed by the Guangzhou-based XPeng’s aviation affiliate, is one of dozens of flying car projects worldwide.

“It will be a very important base for the next generation of flying car," said Minguan Qui, the general manager of Xpeng Aeroht company.

The two-seater electric aircraft has eight propellers and can fly for 140 km in 45 minutes, reaching a top speed of 130 km/h.

Although pilotless vehicles may one day ferry passengers in the air, the technology still has a long way to go as it faces major challenges - including battery life, air traffic control and safety and infrastructure issues.