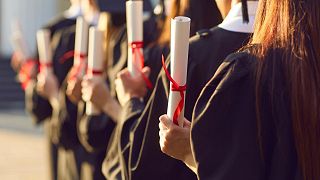 The University of Oxford has topped an international university league table for the seventh year in a row, while two other British universities also made the top 10.

Imperial College London in the UK moved up from 12th position last year to 10th in the latest rankings.

The US continued to dominate as the most-represented country overall, taking seven of the top 10 positions and 58 out of the top 200.

But there is a warning that Chinese universities are closing in on the US' global dominance of higher education, with the ranking revealing that the research supremacy of US universities is waning “in part because of a growing gap in output between elite universities and the rest”.

This year’s rankings include 1,799 universities across 104 countries and regions.

The table is based on 13 performance indicators that measure an institution’s performance across four areas: teaching, research, knowledge transfer, and international outlook.

In total, three universities in the UK - Oxford, Cambridge and Imperial College London - made it into the top 10.

The next best university in Europe was ETH Zurich, which tied with Columbia University in the US for joint 11th position overall.

Other universities in the UK and in Germany rounded out the 10 best-performing institutions from the region.

China catches up in research quality but international outlook is weak

The rankings also revealed that Chinese institutions are catching up when it comes to research quality, as measured by citations.

Over the past year, China’s average score for citations increased significantly, from 55.6 to 58.0; in the same period, the US score dropped slightly, from 70.0 to 69.4 (based on universities ranked in both years).

Wei Zhang, an associate professor at the University of Leicester and an expert on higher education in China, told THE that the country was now "unequivocally" a science superpower.

The pandemic border closure is not the driving factor behind the decline, said THE, as the data reflected the academic year 2019-2020. Experts have instead cited geopolitics as an explanation.

"It is certainly the case that Chinese academics are more cautious and have to jump through more bureaucratic hoops to engage [with their] foreign counterparts than five years ago. Some have judged that it’s best just to keep their heads down," James Laurenceson, director of the Australia-China Relations Institute at the University of Technology Sydney, told THE.

As Chinese scientists and doctoral students have become less welcome in some countries, “it is likely that sooner or later, higher education in China will [be] less welcoming to outsiders from at least those countries,” said Simon Marginson, director of the Centre for Global Higher Education at the University of Oxford.

"That is the logic of international relations".

Meanwhile in the US, the researchers noted a split between the quality of the research output from elite universities and the rest.

"Deep analysis of the trends in our rankings data shows a clear difference between the overall performance of the top 25 per cent of US universities and the bottom 75 per cent," said David Watkins, head of data science at THE.

"The top quartile of universities remain broadly in line with their global peers; however, the remaining 75 per cent are dropping in the rankings and underlying scores compared with their peers around the world".

Oxford’s vice chancellor Louise Richardson said in a statement: "My colleagues and I are absolutely delighted that for the seventh consecutive year Oxford has been named the top university in the world".

"Above all, I am indebted to the extraordinary women and men of Oxford whose research and teaching continues to excite our imaginations, broaden our horizons, cure disease and explore deeply difficult problems for the betterment of society,” she added. “I am so proud to be associated with them".

Do I need to have a fourth COVID jab? Here's what you need to know