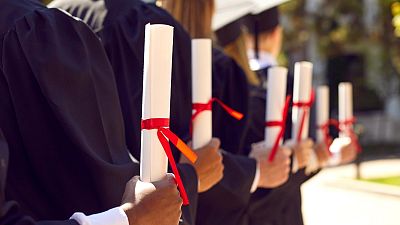 Certain degrees lead to certain jobs which, on average, offer higher salaries than others – but what are they?   -   Copyright  Canva
By Josephine Joly  •  Updated: 15/08/2022

The end of the summer is usually when exam results are released and teenagers embark on their next stage of education at university.

The degree they choose is often based on either what they feel passionate about, the field they want to progress in once their career begins, or how much money it is likely to earn them.

This discussion has been revived with former British Finance Minister and Conservative Party leadership hopeful Rishi Sunak, who vowed to end low-earning university degrees under plans to reform education if he becomes the UK’s next Prime Minister.

He further pledged to create a Russell Group of world-class technical colleges and introduce a British baccalaureate that would prevent 16-year-olds from dropping maths and English.

The changes would mark “a significant stride towards parity of esteem between vocational and academic education,” Sunak said.

“A good education is the closest thing we have to a silver bullet when it comes to making people’s lives better,” he added.

“These proposals represent a significant stride towards parity of esteem between vocational and academic education. And they will take a tougher approach to university degrees that saddle students with debt, without improving their earning potential”.

With rising living costs, the significant university tuition fees in the UK of up to £9,250 per year or higher for international students, and the increasing competition for jobs as more and more students choose to go to university, youngsters may – understandably – be considering the return on investment when choosing what to study.

Certain degrees lead to certain jobs which, on average, offer higher salaries than others – but what are they? We’ve compiled a list below showing some of the highest-earning degrees.

One of the highest-earning degrees in the UK, there are multiple careers you can do with a law degree, making it an attractive subject to study.

For trainees and freshers who start to work in diverse law firms, the country’s law profession promises a minimum wage of approximately £20,000. If you start your career in London, then you can expect a starting salary of approximately £22,000 per year.

City lawyers and international lawyers tend to earn more, with some top firms paying up to £130,000.

A Politics degree is quite often popular in the UK, being one of the highest-earning ones.

From being a politician’s assistant to being a public affairs consultant, your career in the field of politics will get you a massive sum of money.

All you need is the mind to strategise and execute the drafted ideologies with brief leadership skills to sustain and grow as a politician.

The overall average starting salary for this career is £20,900, but it can go up to over £50,000 pretty quickly for the most experienced roles.

Architecture is a field with a never-ending scope and high-paying jobs.

But did you know you must register with the statutory body, the Architects Registration Board before you’re allowed to use the title “architect” in the UK?

Everyone knows managers always make more money. By getting an MBA or a postgraduate degree in Business and Administration, you can more or less guarantee a high-paying job after graduation.

However, there might be some competition as business degrees are oversubscribed due to their popularity.

How could we not mention computer science degrees in this modern, technological age?

Computer science graduates will have a range of careers to choose from given the growth of IT industries and the fact that we use computers every day for literally everything.

You might be surprised at the opportunities one can have when studying for a physics or astronomy degree.

Gaining insight into how the universe works is a challenging but rewarding field of study with some of the highest-paying jobs in the UK.

After ten years, physicists’ and astrophysicists’ salaries tend to increase to £35,000 and £45,000. They’ll take naturally another hike after some years in the job, by which time their salary should be over £50,000.

Meanwhile, senior researchers and university lecturers can earn up to £60,000 per year.

Economics is another high-earning degree, with an average starting salary of £29,700 per year.

Job offers with starting salaries range from anywhere between £25,000 to £35,000, and, unsurprisingly, Economics graduates’ prospects get better with time.

After ten years of employment, the average salary is approximately £40,000. A small percentage of professionals earn more than £100,000 around this point too.

This makes Economics one of the highest paying degrees in the UK, with economists working in banking and financial services tending to earn more.

Fact: people with engineering degrees make good money. This high-paying degree is also flexible in terms of job opportunities, with roles varying from scientific research to working as a field engineer or having a senior management position.

The median starting salary for chemical engineers under 25 is about £30,000, rising to as much as £75,000 for more experienced engineers.

The overall average salary for this career path is approximately £47,000. However, this varies with each specification.

You should note that with an ever-increasing need for innovative technology and infrastructure, engineering will always be in high demand.

Deeply passionate about animals and don’t mind getting a little messy from time to time? Veterinary medicine sounds like the perfect area for you.

A veterinary medicine degree can see you reap the financial rewards fairly quickly. On average, vets make £45,000 per year or £23.08 per hour.

Newly qualified vets usually have starting salaries of around £35,000, which then can increase over time to as much as £70,000 as their experience grows.

This career has one of the highest starting salaries, making it a desirable degree to study (plus, you get to spend most of your time with animals, so what’s not to like?).

Salaries differ when it comes to the medical field: not all medicine graduates earn huge amounts upon graduation. A junior doctor may be on a basic annual salary of £23,000.

However, if you begin to specialise in a specific area of medicine, such as cardiology, your starting salary should increase significantly over the £30,000 mark, increasing as your career progresses.

According to the Office of National Statistics (ONS), the average UK-based medical professional earns £69,463, which is more than double the average salary, making medicine a top spot in the list of highest-paid degrees.

The most common role in the medicine area is a General Practitioner (GP).

In addition to paying well, dentistry isn’t regarded as an overly competitive job market – but there’s some competition to study dentistry at university.

Over 90 per cent of graduates tend to find employment roughly six months after graduation in either the NHS or private practices.

If you work as a salaried dentist employed by the NHS, mainly in community dental services, you’ll earn around £43,019 to £92,013, according to graduate careers website Prospects.

In NHS trust hospitals, consultants in dental specialties earn a basic salary of £84,559 to £114,003 depending on the number of years spent in the consultant grade.