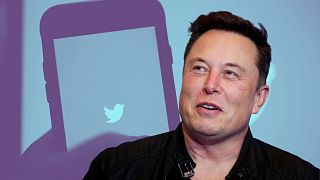 The news-making Tesla CEO has posted many bizarre tweets on Twitter in the past few years.   -   Copyright  Canva, AP
By Giulia Carbonaro  •  Updated: 10/10/2022

An unwanted recommendation for Kyiv about how to end the war with Moscow. And a few days later, a word of advice for Taiwan - suggesting the island give in to China’s claims on its territory.

These are just the latest controversial statements made by billionaire Elon Musk, most of which were dumped on Twitter, the social platform he is finally about to buy after a long back-and-forth with its current board.

Like many of the world’s richest men do, one would think Musk would limit himself to talk about what he does best: business. But the Tesla CEO has been presenting himself as a global affairs expert, a political analyst and an overall source of wisdom on any and all issues - issuing scores of outlandish statements, laconic judgments and quirky ideas of which Twitter keeps score.

In several cases, his eccentric statements hurt his own company, Tesla, making its market value drop.

Here are the eight most explosive and off-the-wall tweets Musk has posted so far on the platform, according to Euronews Next.

In August 2018, Musk announced that he had plans to take Tesla private at $420 a share. In a tweet, the company’s CEO said he had investor support and that funding was “secure”.

For weeks, investors speculated wildly about Tesla’s future, until Musk announced the company would remain public after all.

But that wasn’t the end of the story: despite Musk’s lawyers saying that the investment was real and already secured (even though many pointed out it was probably just an unfortunate 4/20 weed joke), the US Securities and Exchange Commission (SEC) sued Musk for fraud.

Musk’s lawyers eventually settled and paid the US agency $40 million in fines, and Musk stepped down from being Tesla’s chairman for three years.

On top of that, Musk was asked to send all his tweets that could influence the stock price of Tesla to the SEC for review before posting them. And yet...

The agreement reached with the SEC in 2018 wasn’t the end of Musk tweeting confusing statements about Tesla.

In May 2019, he tweeted about Tesla stocks being too high “imo” - getting around his deal with the SEC by stating that the tweet represented his sole opinion and not that of the company.

And still, within hours, Tesla stocks dropped by nearly 10 per cent and $14 billion were wiped off the company’s market value.

There’s no more trace on Twitter of a 2018 post that led Musk to be the subject of another lawsuit, this time for defamation.

In a now-deleted tweet, Musk called British diver Vernon Unsworth, who helped rescue a group of boys who were stranded in a cave in Thailand for days, a “pedo guy”.

The insult came after Unsworth called Musk’s suggestion of sending a miniature submarine to save the boys, together with a team of Tesla engineers, a mere publicity stunt.

For Unsworth, being called a paedophile went far beyond what he considered acceptable, and he sued Musk. But in 2019, a US jury found Musk innocent, recognising that ‘pedo guy is a common expression in South Africa.

On August 16, 2019, Musk appeared to call for a nuclear strike on Mars, with a single tweet that read “Nuke Mars!”. In a series of later tweets, he said that t-shirts with the slogan would be coming soon and promised Mars a “hot date”.

A few days later, Musk explained that hitting Mars with “a continuous stream of very low fallout nuclear fusion explosions above the atmosphere” would create artificial suns without making the planet become radioactive.

The idea isn’t total nonsense, as nuking Mars is an operation that could actually work the way Musk described.

But for the time being, legislation, ethical considerations and issues of cost and jurisdiction certainly seem to stand in the way of any such plan being carried out.

Musk was certainly not a fan of pandemic lockdowns, lashing out against them and shouting “FREE AMERICA NOW” in a tweet in April 2020.

Both downplaying the pandemic and spreading conspiracy theories about it, Musk said that the panic over COVID-19 was dumb, that chloroquine was a beneficial remedy against the virus and that something quite not right was going on with testing.

As his comments on the pandemic suggest, Musk is no stranger to America’s culture wars. In July 2020, Musk tweeted that “pronouns suck” - in what many interpreted and criticised as an attack against transgender people.

Musk later responded that he “absolutely support[s] trans, but all these pronouns are an aesthetic nightmare”.

On April 14, 2022, Musk announced he wanted to buy Twitter. Of course, he tweeted about it.

As is often the case with the eccentric billionaire, many wondered if Musk was just joking about taking over the social media platform, but his offer to buy the company for €44 billion was seriously considered by Twitter’s board, and later accepted.

But sure enough, Musk quickly changed his mind, and for several months tried to withdraw his offer - sparking a major legal battle with the company - until he made another U-turn in October and agreed to proceed with the deal after all.

The Musk-Twitter saga is still technically unresolved, but right now Musk seems determined to go forward with acquiring the company.

8. Trying to end the war in Ukraine

By now a lot of people would like to see the war in Ukraine end as soon as possible. But not everyone has the self-confidence to believe they have the solution to end the conflict. Musk does.

On October 3, Musk laid out his terms for immediate peace between Kyiv and Moscow, asking for a redo of the elections Russia orchestrated in the four regions it annexed in eastern Ukraine, this time “under UN supervision”; for Crimea to be formally recognised as part of Russia; and for Ukraine to remain neutral in the future, instead of joining NATO.

Musk put his ideas to the vote of his over 108 million followers. Ukraine’s President Volodymyr Zelenskyy was not pleased.