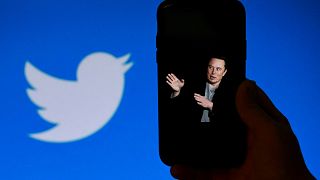 A phone screen displays a photo of Elon Musk with the Twitter logo shown in the background   -   Copyright  OLIVIER DOULIERY/AFP or licensors
By Jonny Walfisz  •  Updated: 28/10/2022

Elon Musk has finally completed his expensive bid to own Twitter. After months of back and forth, the world’s richest man paid $44 billion (€44 billion) for the social media platform.

He celebrated the fact with a typical pithy response, tweeting a video of him arriving at the firm's San Francisco office carrying a sink with the caption “let that sink in!” Since the deal was made official, he tweeted that “the bird is freed”. He also promptly fired three of its top officials. No hard feelings there then.

For those who haven’t been following the twists and turns of Musk’s attempts to buy the platform, the billionaire and the company have fought a bitter and very public battle over valuations and Musk’s intention with the app.

Now that he’s got his mitts on the thing though, it’s worth asking what exactly has he achieved by buying Twitter?

Musk believes the platform is worth billions, but is it?

He also thinks it needs to be a “safe space” for free speech. What does that mean?

And although he swaggered into the headquarters smugly yesterday, is this about to be his costliest miscalculation yet?

It’s very hard to make valuations when you don’t have all the figures. But we can work out if it looks like Musk ultimately got played when it came to buying Twitter.

Musk first made the huge offer to buy the platform in April. This was after he’d already bought a large stake in the company earlier in the year.

The market valuation for Twitter has rocketed up and down since that proposal was made. In part that’s been due to events like Twitter suing Musk over allegations that he had manipulated the markets by tweeting about his intentions to buy it.

But it also was in part due to a spat that broke out between the two sides over the valuation of the company Musk had been given.

Musk argued that Twitter had been overvalued as the percentage of bots and fake accounts on the site were higher than had been made out to him.

In July, Musk tried to pull out of the deal.

Twitter responded by a lawsuit that would ensure Musk had to follow through on the transaction as the deal had already been made. That was to be decided on 17 October.

And in all the time between then and the upcoming court date, Twitter’s value kept on dropping, in part due to Musk’s public criticism.

Until, seemingly out of nowhere, Musk claimed he was happy with the deal on 4 October.

In the intervening time since April, the market value of Twitter has now actually reached a point higher than when Musk first made his offer.

When he made the offer, Musk made a bold statement.

“This is just my strong, intuitive sense that having a public platform that is maximally trusted and broadly inclusive is extremely important to the future of civilization,” he said.

“I don’t care about the economics at all.”

It’s lucky he doesn’t care about the economics, as it’s very unclear if he’s made away with a good deal here. But let’s bite into the first point he made there. The point about a public platform that’s “broadly inclusive”.

Will anything really change?

The entire time he’s been vying to take over Twitter, there’s been one consistent theme. Musk wants to make it a space for free speech to flourish.

He’s been adamant that in his hands, the bans for controversial (for some) characters like Donald Trump and Kanye (Ye) West would have never happened, and their accounts will be reinstated.

“I think that was a mistake because it alienated a large part of the country and did not ultimately result in Donald Trump not having a voice,” Musk said in May.

Trump has since said on his own platform that he's glad Twitter is in "safe hands".

What will Musk actually do now he’s in control?

There have been reports that Musk will fire up to 75 per cent of staff, but the billionaire has dismissed the suggestion.

Since his acquisition, there has been a noted wave of tweets using slurs and hate speech celebrating Musk’s arrival.

Musk’s big statement that “the bird is freed” has also met with resistance from the Thierry Breton, the EU Commissioner for the Internal Market, who responded “In Europe, the bird will fly by our rules”.

In the same post, Breton adds a video of Musk agreeing with him on a piece of EU legislation that will fine social media companies that do not moderate misinformation and hate speech.

And then there’s the matter of how Musk will actually use Twitter to make money.

While he has spent some time decrying the need for adverts on Twitter, recently Musk has taken a different tack.

In a publicised memo to advertisers, Musk wrote that “Twitter obviously cannot become a free-for-all hellscape, where anything can be said with no consequences!”

Is the social media bubble about to burst?

So what is Musk actually going to do? It’s not really clear. As some users threaten to jump ship, and his latest move to calm advertisers, it would seem like the best course of action is nothing at all.

With Musk now at the helm, he’s in control of a heck of a lot of data, which will continue to have great monetary worth to huge numbers of industries.

But one of the giants of that exact field is currently floundering. Meta/Facebook’s valuation is tanking right now.

It’s a year to the day since Mark Zuckerberg presented his vision of the Metaverse, his online replacement for social interactions in the physical world. Ever since the unveiling, Zuckerberg has been relentlessly met with derision for his risible attempt at painting the metaverse as anything other than an over thought and underdeveloped concept.

Zuckerberg has sunk more than $100 billion into the project so far, and the avatars don’t even have legs yet. The whole thing looks unimpressive, and there’s no clear way anyone believes they will meaningfully use the platform ever.

After devastating quarterly losses, shares in Meta have dipped by up to 25 per cent. The whole venture is looking like a misplaced gamble, which is exactly the situation Musk could put himself in if he’s to try and shake up Twitter too much.

So where does that leave Musk? A platform that he’s probably spent too much on to acquire, with goals for free speech that look impossible or at least highly unlikely to be fulfilled or managed. Nevertheless, Musk has proved he has an uncanny ability to keep making money on increasingly ambitious projects. It would be foolish to count out the world's richest man and one of its biggest influencers.

He’s put his money where his mouth is by turning up to the office, but maybe he should have just shut up in the first place.

Elon Musk's 8 most explosive tweets of all time