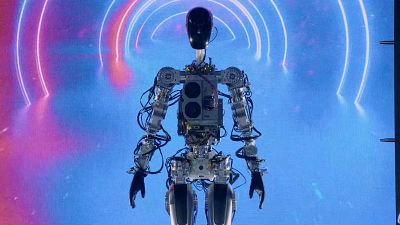 Tesla unveiled its humanoid robot at the company’s artificial intelligence event on Friday (September 30) - to a mixed reception.

The bot, called Optimus, walked slowly and awkwardly onto stage, before waving to the crowd and performing a hands-in-the-air dance.

This robot, which was developed in February according to the company’s CEO Elon Musk, then turned and walked back off stage.

A more advanced version - which Musk said is closer to the robot that he plans to mass produce and sell within the next three to five years - was then carried onto the stage, again waving at the crowd.

Musk claimed this version would be able to walk in a few weeks.

This is not the first time a car manufacturer has dabbled in making humanoid robots.

But what sets Optimus apart is that Musk wants to be able to produce millions of these robots, selling them for less than $20,000 (€20,470) each.

"There's still a lot of work to be done to refine Optimus and prove it," he told the audience, adding later, "I think Optimus is going to be incredible in five or 10 years, like mind-blowing."

The robots on stage at Tesla's office in Palo Alto were limited to demonstrating their ability to wave - but the crowd was treated to a video showing the robot carrying boxes and picking up a metal bar at a company factory.

With the unveiling of Optimus, Tesla joined a host of other car manufacturers involved in the business of humanoid robotics.

Hyundai owns a collection of humanoid and animal-like robots thanks to its 2021 acquisition of robotics firm Boston Dynamics, while Ford has partnered with Oregon start-up Agility Robotics, which makes robots with two legs and two arms that can walk and lift packages.

But it was Honda’s 22-year-old humanoid Asimo that drew many comparisons online. Unveiled by the Japanese carmaker in 2000, and rolled out on stage at regular intervals ever since, Asimo was able to run and jump, and was memorably programmed to pour tea at one demonstration.

Musk suggested that the problem with flashy robot demonstrations is that the robots are “missing a brain” and don’t have the intelligence to navigate themselves.

Tesla claims the robots use AI that is being tested in its cars as the company rolls out Full Self-Driving. It said a similar concept would be used to teach tasks to the robots.

Musk told the audience that the robot can do much more than they were able to show at that time, and that “we just didn’t want it to fall on its face”.

But Tesla’s demonstration offered little evidence that Optimus was any more intelligent than robots developed by other companies and researchers.

Many experts and critics tuning into the demonstration were not convinced.

“Zero demonstrated progress of actual autonomy re: Optimus. Pretty telling,” said Cynthia Yeung, the head of product at Plus One Robotics, which makes software for logistics robots.

In a tweet, she suggested Tesla “hire some PhDs and go to some robotics conferences,” insisting “none of this is cutting edge”.

One robotics expert expressed doubt about the need for the humanoid form in the first place.

“When you’re trying to develop a robot that is both affordable and useful, a humanoid kind of shape and size is not necessarily the best way,” said Tom Ryden, Executive Director of the nonprofit start-up incubator MassRobotics.

Are humanoid bots a gimmick?

Ryden said carmakers’ research into humanoid robotics can potentially lead to machines that can walk, climb and get over obstacles, but impressive demos of the past haven’t led to an “actual use scenario” that lives up to the hype.

“There’s a lot of learning that they’re getting from understanding the way humanoids function,” he said. “But in terms of directly having a humanoid as a product, I’m not sure that that’s going to be coming out anytime soon”.

Evan Ackerman, a senior editor at IEEE Spectrum, an engineering magazine, wrote of the demonstration that “the hype was just that - hype”.

In his article, he argued that while it wasn’t a total disappointment, “there’s very little to suggest that it disrupts robotics the way that SpaceX did for rockets or Tesla did for electric cars”.

But the reaction was not all negative. Some focused on the speed of Tesla’s development since August last year, when Tesla announced its project with a stunt that had a person in a white suit simulate a humanoid robot.

"There's some discrepancy between sort of the ambition and what they have presented," he said. "When it comes to dexterity, speed, the ability to walk in a stable fashion and so on, there's still a lot of work to be done".