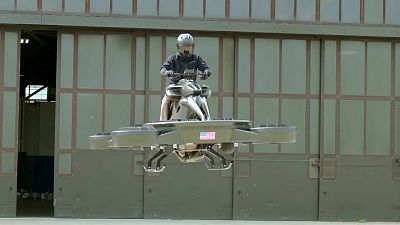 Learning to ride a bike is one of our earliest achievements in life. But how about learning to fly your bike?

The world's first flying bike was revealed on Thursday at the Detroit Auto Show, meaning someday soon we might ride the drone-like vehicle instead of cars.

The XTURISMO hoverbike is capable of flying for 40 minutes and reaching speeds of up to 100 km/h.

Thad Szott, the co-chair of the Motor City's auto show, was one of the first to take a test drive.

"I mean, it's awesome! Of course, you have a little apprehension, but I was just so amped. I literally had goosebumps and feel like a little kid," he said.

Szott sees great potential for the XTURISMO in the future.

"I think we'll start with delivering goods and services, maybe by drone. It's ready for today's world if you go airport to airport. But I'm anxious to see when we can go neighbourhood to neighbourhood. So, let's get it worked out," he said.