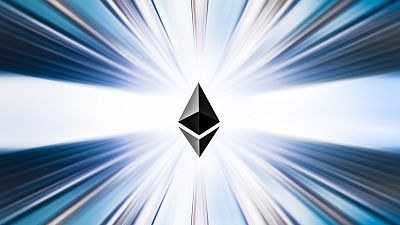 The world’s second-largest cryptocurrency has undergone a significant transformation that will change its technology to cut carbon emissions by more than 99.9 per cent, according to its platform Ethereum.

The transition known as "the Merge" has been finalised, Ethereum founder Vitalik Buterin confirmed on Thursday.

"And we finalized!... Happy merge all. This is a big moment for the Ethereum ecosystem," he said in a tweet.

It means its blockchain technology has been upgraded from the intensive energy-consuming model used by its rival Bitcoin.

Euronews Next looks at what is changing and how the transformation may affect the crypto market.

What is the Ethereum 'Merge' and Proof of Stake?

The first part of the Merge upgrade began on September 6 with the Bellatrix upgrade, which marked a so-called "hard fork" that will convert Ethereum from a proof-of-work (PoW) to a proof-of-stake (PoS) base.

The switch will take Ethereum from the intensive energy-consuming PoW model to the PoS model. Both mechanisms are used to confirm transactions and add new blocks to the chain, but they work differently.

The PoW system works like a competitive numeric guessing game and the first person to solve the puzzle is awarded a fixed amount of cryptocurrency.

It requires a global network of computers to run at the same time when a transaction takes place and therefore a lot of energy.

In the PoS system, you do not need the energy-consuming hardware as you acquire coins, which are put up as collateral in the staking process and there is then a random selection through the software.

How have the markets reacted?

Crypto markets actually slumped by the end of the day on Thursday, with Ethereum 5.5 per cent lower despite the Merge going smoothly.

"This has been a long time coming, and it has so far run smoothly. Price action in the short term has been muted, and I think this will continue due to the immense amount of option interest that has been opened recently," said Richard Usher, head of over-the-counter trading at the London-based crypto company BCB Group.

"My feeling is that today is a hugely significant step forwards in the usability of cryptocurrency going forwards. Whilst it may not directly affect BTC (Bitcoin)etc, it will underpin the future of all crypto assets moving forwards," he said in comments to Euronews Next.

The volatile crypto market has been under pressure in recent months in what has been called crypto-winter where the value of cryptos such as Bitcoin has taken a hit.

Usher said he believes that when the broader risk markets start to recover, he firmly believes that today's Merge "will give confidence to beleaguered investors that the wider crypto assets have a place in their portfolios".

The switch to PoS is "a step in the right direction on sustainability," Alex de Vries, an economist who runs the Digiconomist website, told Euronews Next.

He estimates the energy consumption of Ethereum mining is about 72 terawatt-hours a year, which is equivalent to the carbon footprint of Switzerland.

De Vries says he is working on figuring out how much the switch will save energy. At the moment, he estimates it’s at least 99 per cent.

"This translates to something like the electricity consumption of a country like Portugal (a quarter of all data centres in the world combined) vanishing overnight," he said.

"Blockchain by design is just never going to be super-efficient technology," he said.

A merge or a split?

The Merge name choice is because Ethereum is adopting the Beacon Chain PoS system but it is a bit deceptive as there is likely to be more of a split, creating the PoS chain and a PoW chain.

This fork is not the first time to happen in crypto history. Bitcoin too has seen splits after upgrades and has created Bitcoin Gold and Bitcoin Cash.

For investors and the crypto start-up scene, Merge will not have that much of an impact, according to Eloisa Marchesoni, a tokenomics expert.

"The worst impact will be on the miners," she told Euronews Next, explaining that the value of the old version is likely to decrease and the equipment used to mine will not work for the new PoS model.

For Ethereum, if the PoS version takes off and the price is high, then the PoW version may have a low price, which will force the majority of miners to shut down.

Marchesoni, who mines Ether herself, said the costly equipment is not a total waste as you can find alternative coins to mine on PoS that is compatible. Although it can take a month to do so, it does not cause massive issues.

The main point miners are upset about, she said, is the centralisation aspect and the feeling that Ethereum is "acting like Wall Street and the banks".

As big as Bitcoin?

Though it may be cleaner for the environment than Bitcoin, it is unlikely that the upgraded Ethereum will reach the top spot in the crypto market.

If Ethereum can go from proof of work to proof of stake, why wouldn't they just say, ‘Bitcoin, you're either going to do the same thing or we're not going to allow Bitcoin anymore’

"Bitcoin will always be like electronic digital gold. And Ethereum is like fiat money, it's just two completely different things," said Marchesoni.

"And no one holds their bigger capital in Ethereum, people will hold big capital in Bitcoin. None of the OGs, as we call them, none of the originals in crypto actually speculate on Bitcoin that much".

Marchesoni expects Ethereum to see a slight surge in price but only for perhaps a few days or weeks.

In the long term, she believes Ethereum is laying the groundwork for PoS, which unlike PoW cannot be used for the metaverse or NFTs, but that other cryptos will develop the blockchain for new protocols and new governance models.

De Vries also does not believe Merge will cause the latest crypto bull run. Although "it is a step in the right direction" for cleaner crypto mining, he said it does not solve the issues of PoS, mainly scalability.

However, Merge could perhaps prompt policymakers to ban PoW in the coming years as they try to regulate cryptos and have pointed to concerns about its environmental impact.

"If Ethereum can go from proof of work to proof of stake, why wouldn't they just say, 'Bitcoin, you're either going to do the same thing or we're not going to allow Bitcoin anymore,'" said de Vries.

"I think it's a very real risk if it (Merge) is really successful. I would fully expect that this is going to be back on the table again, maybe not right away, but definitely soon".

How will it affect Web3?

According to Conor Svensson, CEO and Founder of Web3 Labs, the Merge will not change much for Web3 in the near term.

"The merge event has been on the minds of the Ethereum community for multiple years now and there's been confidence in the inevitability of it with the various teams building on top of Ethereum technology," he told Euronews Next.

Svensson said the challenge for Ethereum now is that it needs to continue its updates, such as for security or speed, to still keep ahead of its competitors. But he is confident of Ethereum's place in Web3 is the building block for most Web3 technologies, such as NFTs.

"These decentralised autonomous organisations, all of these are appearing first on Ethereum and that has been what's brought all of these projects onto it," he said, adding: "Where is the main innovation in Web3 happening? Still mainly happening on Ethereum".

Why you should work at a European cloud company

The end of the COVID pandemic is in sight, says WHO chief