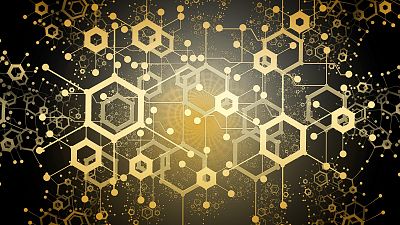 Blockchains have become popular over the past few years because they allow us to secure and verify all kinds of data in a decentralised network that cannot be altered.   -   Copyright  Pixabay
By Aisling Ní Chúláin  •  Updated: 21/10/2021

When you think about blockchains, probably the first thing that comes to mind is Bitcoin or cryptos.

But actually, the technology is extremely versatile and has potential far beyond cryptocurrencies.

Blockchains have become popular over the past few years because they allow us to secure and verify all kinds of data in a decentralised network that cannot be altered.

The idea has its roots as far back as 1991, when two computer scientists, Stuart Haber and Scott Stornetta, proposed a system to protect timestamps on documents from being interfered with.

Satoshi Nakamoto, the anonymous Bitcoin inventor, then built on this system and referenced the two scientists in his Bitcoin whitepaper.

He successfully deployed the first public blockchain in 2009.

What is a blockchain?

Put simply, a blockchain is a database in the form of a distributed ledger that uses cryptography to secure any kind of information.

This ledger takes the form of a series of records or “blocks” that are each added onto the previous block in the chain, hence the name “blockchain”.

Each new block reinforces the verification of the previous block and hence the entire blockchain.

The block also contains the hash of the previous block in the chain. These are the backbone of a public blockchain.

It’s how all the participants in a public, decentralised network can come to a consensus on how a block is verified and added to the chain.

A cryptographic hash function is basically a mathematical algorithm that maps data of arbitrary length to an output of fixed length.

So, if you want to represent, for example, a list of names of varying lengths, a hash function would output each of these names (the data) into a unique string of numbers of a fixed length. This string of numbers is known as the hash.

The hash function will return the same hash no matter how many times you input the same data.

If you even slightly change the inputted data, the hash will change completely.

Hashing is considered a function that only works one-way. That’s because it’s highly infeasible - but not impossible - to reverse engineer the data that outputs a given hash without a huge, huge amount of computational power.

The fastest way to guess the data that produces a given hash is simply to guess and check, over and over again.

In the Bitcoin blockchain, which uses a proof of work consensus mechanism, computers in the network join in this elaborate guessing game hoping to solve the puzzle first.

The computer with higher computational power - meaning the capability to run through more guesses faster - is more likely to win the race and therefore verify the block for the reward of Bitcoin.

It’s important to remember that the word blockchain doesn’t describe any single database or network. Rather, it’s a type of technology and there are different kinds of blockchains that work in different ways.

A private blockchain is a closed network. It still uses some decentralisation and a peer to peer system, but overall this kind is controlled by a single entity and access is restricted to a defined network.

A hybrid blockchain is a combination of a public and private blockchain. This kind of blockchain allows an entity to distribute a ledger with some publicly accessible data but also restrict access to more sensitive data within the network.

A consortium blockchain has similarities with a private blockchain only. This type of ledger is controlled by multiple entities rather than a single one.

Turkish lira's decline has impact over the border in Syria