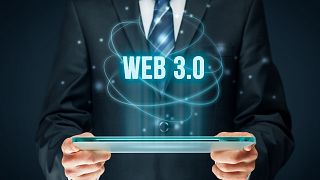 In the Web3 world, search engines, marketplaces and social networks will have no overriding overlord.   -   Copyright  Canva
By Pascale Davies  •  Updated: 27/12/2021

Web3 is the latest Silicon Valley buzzword, which is being dubbed as the next phase of the Internet. It has got tech and cryptocurrency enthusiasts buzzing but others, Jack Dorsey in particular, argues it is already in the hands of deep-pocketed venture capitalists.

But what is Web3 and can this future vision of a decentralised and egalitarian Internet work?

Put simply, Web3 is an umbrella term for an online ecosystem that cuts out the big middlemen on the Internet. Platforms on Web3 are not owned by central gatekeepers and you wouldn’t navigate the Internet through search engines such as Google.

It uses blockchain, the same system used by cryptocurrencies and non-fungible tokens (NFTs).

The first version of the world wide web was launched by Sir Tim Berners-Lee in 1989. Back then, the few people who had the knowledge to could put information online in a decentralised way.

Creating decentralised tools is not easy. Centralised systems are easier to build but less transparent.

Web 2.0 came some 10 years later and started with the development of tools that were easy to use, allowing anyone to upload content online via the tech giants such as Google, Twitter and Facebook (now Meta).

But these free tools supplied by the tech companies, that allowed everyone to become publishers, was also harvesting our personal data to be used for tailored advertisements and marketing campaigns.

In theory, Web3 will be a combination of the two earlier versions of the Internet but will take the power away from the tech giants and corporations and put it back into the people’s hands.

And instead of exchanging our data to upload content online, users can become participants and shareholders by earning tokens on the blockchain system, which will allow you to have a say over a network.

“We can see that currently on the Internet, your experience becomes bad as soon as you have to take out your credit card,” he told Euronews Next, adding, Web3 basically fixes issues such as payments.

In the Web3 world, search engines, marketplaces and social networks will have no overriding overlord.

Before, in the financial world, security was provided by your bank. All of a sudden, now, you have to do it yourself since you own the privileges and you can manage your money online.

So you can control your own data and have a single personalised account where you could flit from your emails to online shopping and social media, creating a public record of your activity on the blockchain system in the process.

A blockchain is a secure database that is operated by users collectively and can be searched by anyone. People are also rewarded with tokens for participating.

It comes in the form of a shared ledger that uses cryptography to secure information. This ledger takes the form of a series of records or “blocks” that are each added onto the previous block in the chain, hence the name.

Don’t we already have Web3?

The idea of a decentralised Internet has been in the works for the last decade with the explosion of cryptocurrencies and blockchain, and there are arguably some early Web3 applications that already exist. Big tech companies are already betting big on it and even assembling Web3 teams. But we are not officially in the Web3 world.

Can Web3 be egalitarian?

A decentralised and egalitarian Internet may sound far-fetched but it already appears doomed to fail.

The people currently pouring in tens of billions of dollars into Web3 services are tech companies, software developers, venture capitalists and hedge funds.

Meanwhile, many current blockchain networks are not equally distributed and are in the hands of venture capitalists and early adopters. Crypto company Hashed raised €175 million and venture funds Kraken Ventures Fund and Brinc have also raised millions.

This week, the former Twitter CEO Jack Dorsey suggested that Web3 is under the control of the venture capital industry, particularly the venture capital firm Andreessen Horowitz, an early Facebook backer and a Web3 advocate. It was reported that representatives from the firm visited Capitol Hill in November to try and influence regulation around Web3.

“You don’t own Web3. The VCs and their LPs do. It will never escape their incentives. It’s ultimately a centralized entity with a different label,” the CEO of Block (the payments company formally known as Square) tweeted.

On Thursday, Dorsey tweeted in response that he had been blocked on Twitter by Marc Andreessen, co-founder of Andreessen Horowitz.

"I’m not suggesting web3 is real – seems more marketing buzzword than reality right now – just wondering what the future will be like in 10, 20 or 30 years. 2051 sounds crazy futuristic," he wrote on Twitter.

Musk also asked where it was, to the annoyance of Web3 devotees.

What are the challenges?

Experts have expressed concerns over how to regulate a decentralised internet, which would make it even more difficult to prevent cybercrime, hate speech and misinformation.

Web3 can also be hard to use but Gauthier says the challenge is not if people can access it easily but if they know how to manage their data securely.

“Anyone on the planet can access Bitcoin or Ethereum today, as long as you have an internet connection. So there are billions of human beings that can access Web3 systems while the same human beings cannot necessarily access the banking system,” he said.

“To understand how Web3 works, there are some mistakes you should be aware of and you have to pay attention to your safety.

“Before, in the financial world, security was provided by your bank. All of a sudden, now, you have to do it yourself since you own the privileges and you can manage your money online. So that means that there is a whole education and understanding part of the security issues that are important.”

Building the technology to make Web3 fully decentralised, which has never been done before, is also one of the challenges.

“Creating decentralised tools is not easy. Centralised systems are easier to build but less transparent,” said Úrsula O’Kuinghttons, director of public relations of the blockchain infrastructure company Parity Technologies, who also works with the Web3 Foundation.

“Some blockchain hybrids are a combination of centralised and decentralised systems but creating 100 per cent decentralised tools is the hardest and the longest part. But this is what Web3 is truly about,” she told Euronews Next.