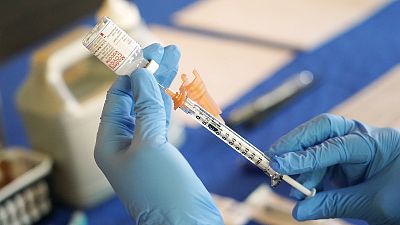 US biotech company Moderna announced on Friday that it was filing a lawsuit against pharmaceutical giants Pfizer and BioNTech for copying "the groundbreaking technology" behind its COVID-19 mRNA vaccines.

The company filed patent infringement lawsuits in both a US federal court and a German court.

"This groundbreaking technology was critical to the development of Moderna's own mRNA COVID-19 vaccine, Spikevax. Pfizer and BioNTech copied this technology, without Moderna's permission, to make Comirnaty".

Moderna and Pfizer/BioNTech were the first to put their coronavirus vaccines into production, very soon after the start of the pandemic, thanks to this messenger RNA technology.

The mRNA vaccines work by injecting a genetic code for the spike protein that coats the surface of the coronavirus.

That code, the mRNA, is encased in a little ball of fat, and instructs the body’s cells to make some harmless spike copies that train the immune system to recognise the real virus. That approach is radically different to how vaccines have traditionally been made.

Vaccines previously relied on weakened or inactivated forms of viruses to train the body to defend itself, and clinical trials to test their safety typically took several years.

The use of messenger RNA technology in Moderna and Pfizer/BioNTech's vaccines, some of the most injected in the world, was the culmination of four decades of research.

Moderna's Chief Executive Officer, Stéphane Bancel, said: "We are filing these lawsuits to protect the innovative mRNA technology platform that we pioneered, invested billions of dollars in creating, and patented during the decade preceding the COVID-19 pandemic."

"This foundational platform, which we began building in 2010, along with our patented work on coronaviruses in 2015 and 2016, enabled us to produce a safe and highly effective COVID-19 vaccine in record time after the pandemic struck," he added.

The statement from Moderna went on to say it expected companies like Pfizer and BioNTech "to respect its intellectual property rights" and would have considered "a commercially reasonable license should they request one for other markets".

"We believe that Pfizer and BioNTech unlawfully copied Moderna's inventions, and they have continued to use them without permission," said Moderna Chief Legal Officer Shannon Thyme Klinger.

A Pfizer spokeswoman declined to comment, saying the company had not been served with a copy of the litigation.

How short YouTube clips can ‘vaccinate’ users against disinformation

Is vaccinating wildlife the solution to preventing the next pandemic?