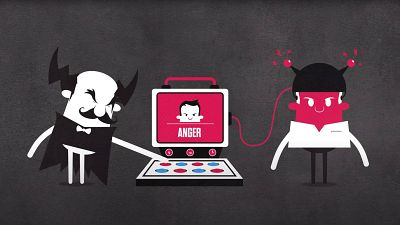 A still from one of the videos which "inoculate" viewers against misinformation.   -   Copyright  Inoculation Science Project
By Luke Hurst  •  Updated: 24/08/2022

People can be "vaccinated" and at least partially protected from misinformation online, according to a new study, which found familiarising people with common manipulation tactics helped them spot harmful content.

By explaining these tactics using short cartoons played during YouTube advertisement slots, the researchers were able to "inoculate" users against misinformation.

Researchers behind the Inoculation Science project compare it to a vaccine: by giving people a "micro-dose" of misinformation in advance, it helps prevent them from falling for it in the future.

Described by the study authors as "psychological inoculation," the technique was found to be consistently effective on users from across the political spectrum.

The trial on YouTube, which has more than 2 billion active users around the world, involved the first "real world field study" of inoculation theory on a social media platform.

And the authors claim the short cartoons avoid biases people may have about where information is from, and if it is true or not. Rather they gave general advice about how to spot potential misinformation.

"Our interventions make no claims about what is true or a fact, which is often disputed," said lead author Dr Jon Roozenbeek, from Cambridge University’s Social Decision-Making Lab.

"They are effective for anyone who does not appreciate being manipulated".

He added: "The inoculation effect was consistent across liberals and conservatives. It worked for people with different levels of education, and different personality types. This is the basis of a general inoculation against misinformation".

Working with a team within Google called Jigsaw, which the company says works on tackling threats to open societies, psychologists from the universities of Cambridge and Bristol made 90-second animated clips familiarising people with common misinformation techniques.

These include the use of emotional language, purposeful incoherence, false dichotomies, scapegoating, and ad-hominem attacks.

The authors argue debunking is impossible to do at scale, and prebunking may be more effective.

"Our research provides the necessary proof of concept that the principle of psychological inoculation can readily be scaled across hundreds of millions of users worldwide".

The trial was composed of seven experiments, involving almost 30,000 participants.

Six initial controlled experiments featured 6,464 participants, with the sixth experiment conducted a year after the first five, to ensure earlier findings could be replicated.

Data about each participant was collected, including basic demographic information, but also levels of numeracy, conspiratorial thinking, interest in news, and others.

They found that the inoculation videos improved people’s ability to spot misinformation, and boosted their confidence in being able to do so again.

Two of the videos were then tested as part of a big experiment on YouTube in advert slots.

Around 5.4 million people in the US saw the videos, with almost a million watching for at least 30 seconds. Some of those users were then asked to complete a voluntary test question.

'Manipulation tactics can be predicted'

"Harmful misinformation takes many forms, but the manipulative tactics and narratives are often repeated and can therefore be predicted," said Beth Goldberg, co-author and Head of Research and Development for Google’s Jigsaw unit.

"Teaching people about techniques like ad-hominem attacks that set out to manipulate them can help build resilience to believing and spreading misinformation in the future.

"We’ve shown that video ads as a delivery method of prebunking messages can be used to reach millions of people, potentially before harmful narratives take hold," Goldberg said.

The ability to recognise manipulation techniques at the heart of misinformation increased by 5 per cent on average among participants in the experiments.

"Users participated in tests around 18 hours on average after watching the videos, so the inoculation appears to have stuck," said van der Linden.

Researchers say that scaling up this concept across social media platforms could have wide-ranging effects on diminishing the impact of misinformation.

Google says it’s already acting on the findings, and that its Jigsaw team will roll out a prebunking campaign across platforms in Poland, Slovakia, and the Czech Republic at the end of August to get ahead of emerging disinformation relating to Ukrainian refugees.