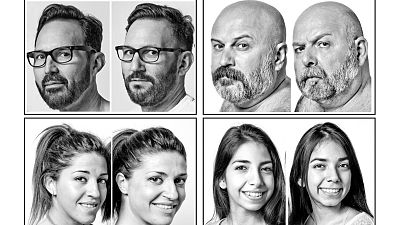 Doppelgängers may not just look remarkably alike - they may also share similar behaviours.

That’s according to research conducted on people who look extremely similar, but are not related.

The researchers found that some doppelgangers share characteristics in genes that are responsible for facial features.

These can include common habits like smoking and traits such as how people respond to education.

In the paper, published in the journal Cell Reports, the authors state that the molecular characteristics that can potentially influence the formation of the human face “correlate with both physical and behavioural attributes that constitute human beings”.

The scientists wanted to find out if there was a scientific basis for the doppelgänger phenomenon.

“The appearance of ‘lookalikes’ of a person, as if they were photocopies, has been a matter of attention in the arts and popular culture, but it has never been approached from a scientific point of view,” said Dr Manel Esteller, Director of the Josep Carreras Leukaemia Research Institute.

“What we have done is to collect the same biological material from these extremely similar individuals (also called ‘dobles’ in Spanish or ‘Doppelgänger’ in German) to see if we could find an objective reason for their similarity”.

The team recruited doppelgängers from the work of a Canadian photographer, François Brunelle, who had been documenting lookalikes since 1999.

The 32 candidate couples completed biometric testing and lifestyle questionnaires, and their saliva DNA was genome tested.

They found that 16 of the couples were clustered in all three of the facial recognition software programmes used, and genetic analysis showed nine of these 16 pairs shared genetic variations.

“It was also curious to verify that the resemblance of these pairs of doubles was not only limited to facial features but it also affected other physical properties - height and weight - and it is even extended to certain traits of their behaviour,” Dr Esteller explained.

He said he was confident the study could one day provide “the basis for diagnosing genetic diseases from the analysis of the image and shape of the face”.

He hopes it could also eventually allow forensic investigators to use an unknown DNA sample collected on a crime scene “to reconstruct the face of the person to whom that genetic material belongs”.