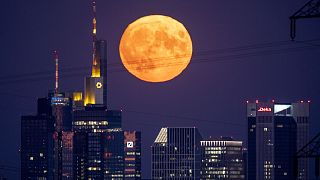 Stargazers' sights were craned towards the heavens on Thursday night for what marked the last of four supermoons this year.

The "Sturgeon Moon" reached its zenith in the early hours of Friday morning, having appeared bigger than normal with orange hues as it lit skies around the globe.

Occurring in August, the name originates from indigenous Americans as it occurs around the end of the summer and the beginning of harvest time when tribes in certain regions would catch sturgeon fish in large numbers.

What is a supermoon?

Supermoons occur when the Moon is full while coinciding with its "perigee," or the point when its orbit brings Earth's natural satellite closest to the planet.

For us on Earth, the Moon appears nearly a third brighter than normal and over a tenth bigger in size.

While technically only occurring for an instant, supermoons often appear full to the naked eye for several days.

Previous supermoons this year have delighted astronomers and photographers alike, providing a staggering nighttime backdrop to some of the world's most familiar skylines and landmarks. Here's a look back at the supermoons that took place earlier this year:

The first was a lunar eclipse that coincided with a supermoon - the so-called super blood moon - in May, a rare event that saw a reddish shade on the surface of the Moon because the eclipse which took place at a time when the Moon was also at its closest to the Earth.

It was the first blood moon to occur in over a year.

Referred to as the “Strawberry Moon” because it's the full moon at strawberry harvest time, this was the second supermoon of the year back in June.

Sometimes also called the "Rose Moon" or "Hot Moon," it's always in the same month as the longest day of the year, the summer solstice.

The penultimate supermoon of the year, the "Buck Moon" takes its name - much like the "Sturgeon Moon" - from Native Americans for the time when antlers would begin appearing on buck deers.

Did you see the "Sturgeon Moon" on Thursday evening? Interact on our social media channels and share your images of the last supermoon of 2022 with us.