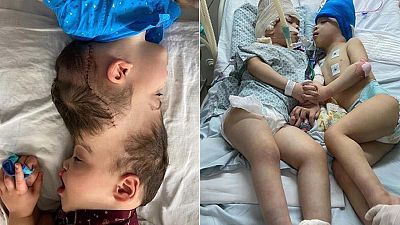 A pair of conjoined twins born in Brazil with a fused head and brains have been successfully separated after what the medical team described as "the most complex surgery of its kind," using virtual reality technology.

Three-year-old boys Bernado and Arthur Lima can now look at each other in the face for the first time, after a series of nine operations culminating in a marathon 27-hour surgery to separate them.

The twins were born in 2018 in the state of Roraima, northern Brazil, as craniopagus twins – an extremely rare condition in which the siblings are fused at the cranium – and have spent most of their lives in a hospital in Rio de Janeiro.

“We had been living in the hospital for four years,” the boys’ mother, Adriely Lima, said in tears after the separation.

The procedure was carried out with the help of London-based medical charity Gemini Untwined, which described it as the "most challenging and complex separation to date," given that the boys shared several vital blood vessels.

"The twins had the most serious and difficult version of the condition, with the highest risk of death for both," said neurosurgeon Gabriel Mufarrej of the Paulo Niemeyer State Brain Institute in Rio, where the procedure was performed.

"It was without a doubt the most complex surgery of my career," he added. "At the beginning, nobody thought they would survive. It is already historic that both of them could be saved".

"We don’t know yet to what extent they will be able to live a normal life," Mufarrej went on, adding that the twins were still in hospital where "a long convalescence" awaits them.

Members of the medical team, which included nearly 100 staff, prepared for the delicate final stages of the surgery on June 7 and 9 with the help of a "state-of-the-art" virtual reality system, Gemini Untwined said in a statement.

Using brain scans to create a digital map of the boys’ shared cranium, surgeons practiced for the procedure in a transatlantic virtual reality trial surgery.

"It’s wonderful to be able to look at the anatomy and perform the surgery beforehand without putting the children’s lives at risk," he said, adding: "You can’t imagine how reassuring this is for the surgeons. To do it in virtual reality was just really man-on-Mars stuff".

Pictures and videos released by medical staff showed the boys lying side-by-side on a hospital bed post-surgery, little Arthur reaching out to touch his brother’s hand.