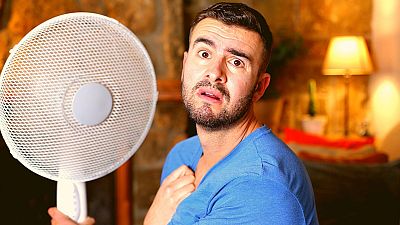 We know - it’s hot. Too hot. Europe is (yet again) entering a period of extreme heat, with the mercury already rising as high as 43°C in parts of Spain.

When it comes to heatwaves, it’s the record temperatures that often steal the headlines. After all, most of us know first-hand how much harder it is to work or carry out basic tasks as thermometers tick up and up.

But temperature is not the only thing that matters. Humidity does too - and the combination of high heat and humidity can get dangerous faster than previously thought, according to research from scientists in the United States.

Experts have long been aware that high temperatures combined with high humidity - measured as “wet-bulb temperature” - can pose a serious threat to the human body.

When the wet-bulb temperature gets too high, there comes a point when sweating no longer works to cool the body, which won’t be able to maintain a stable body core temperature.

A key study in 2010 estimated the web bulb temperature upper limit at 35°C, beyond which the human body can no longer adapt to humid heat.

However, research published earlier this year by scientists at the Pennsylvania State University in the United States has found that the limit might actually be lower than previously thought.

How hot is too hot for normal daily activity?

Detailing their findings in an article for The Conversation, the researchers explained that they wanted to explore this question: How hot is too hot for normal daily activity, even for young and healthy adults?

To answer this, they decided to test the responses of a group of young, healthy adults by exposing them to heat stress in a controlled lab setting.

First off, each participant had to swallow a telemetry pill, which monitored their core temperature.

They then sat in a special chamber, moving “just enough to simulate the minimal activities of daily living” like cooking and eating, said the researchers.

Meanwhile, the scientists slowly increased either the temperature or the humidity of the chamber. As they did so, they monitored as the participant’s core temperature started to rise.

That’s how they discovered that the combination of temperature and humidity whereby a person’s core temperature starts to rise was even lower than the previously theorised 35°C threshold from the 2010 study.

“Our studies on young healthy men and women show that this upper environmental limit is even lower than the theorised 35°C,” the group wrote in The Conversation.

What happens to the human body when it gets too hot and humid?

This is important, the researchers say, because prolonged exposure to high heat combined with high humidity can lead to serious heat-related illnesses.

“When the body overheats, the heart has to work harder to pump blood flow to the skin to dissipate the heat, and when you’re also sweating, that decreases body fluids,” the researchers explain.

And in the worst cases this can result in heatstroke, which is a life-threatening issue.

The researchers also stress that even lower temperatures and humidity can still place stress on the heart and other body systems, and this can be especially dangerous for vulnerable people like the elderly or those with chronic conditions.

Their research will now focus on these vulnerable populations and their response to heat stress.

How to cope in a heatwave

The main risks posed by a heatwave are dehydration, overheating, heat exhaustion and heatstroke, according to the UK’s National Health Service (NHS).

It lists several tips for coping with extreme heat:

If staying in, closing curtains in rooms that face the sun can help keep your home cool.

It’s also helpful to remind yourself of the basic signs of heat exhaustion or heatstroke. These include:

If you notice someone with some or all of these symptoms, try to cool them down. Move them to a cool place, get them to lie down and raise their feet, have them drink plenty of water, spray or sponge them with cool water, fan them, and put cold packs around their armpits or neck.

Call emergency services if you notice signs of heatstroke - for example if the person feels unwell after 30 minutes of resting in a cool place and drinking plenty of water, if they are not sweating, if they have a fever of 40°C or above, if they are breathing rapidly or have shortness of breath, if they exhibit signs of confusion, if they have a seizure, and if they lose consciousness and are not responsive.