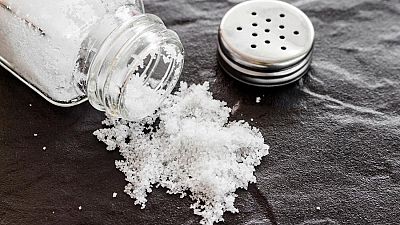 Researchers found that compared to those who never or rarely added salt, those who always added salt to their food had a 28 per cent increased risk of dying prematurely.   -   Copyright  Copyright: Canva
By Josephine Joly  •  Updated: 12/07/2022

People who add extra salt to their food at the table are at a higher risk of dying prematurely, according to a study of more than 500,000 middle-aged Britons.

Researchers found that compared to those who never or rarely added salt, those who always added salt to their food - excluding seasoning during the cooking process - had a 28 per cent increased risk of dying prematurely from any cause.

In the general population, about three in every hundred people aged between 40 and 69 die prematurely.

The increased risk from always adding salt to food found in the new study, published in the European Heart Journal on Monday, suggests that one more person in every hundred may die prematurely in this age group.

The findings also revealed that adding extra salt to meals knocks more than two years off life expectancy for men aged 50, and 1.5 years for women the same age.

The study, led by Professor Lu Qi of Tulane University School of Public Health and Tropical Medicine, suggests that people should consider avoiding seasoning their meals, but it did not definitively rule out other factors, such as salt consumption being a proxy for a generally less healthy lifestyle.

“To my knowledge, our study is the first to assess the relation between adding salt to foods and premature death,” Prof. Qi said in a statement.

Even a “modest reduction” in sodium intake, by adding less or no salt to food at the table, can result in “substantial health benefits,” he added.

Over 500,000 Britons were followed for an average of nine years for the purpose of the UK Biobank study, and other factors that could affect the outcomes – including age, sex, ethnicity, deprivation, body mass index, smoking, alcohol intake, physical activity, diet and medical conditions such as diabetes, cancer and heart disease – were also accounted for.

Almost 18,500 premature deaths (defined as death before the age of 75 years) were recorded after the data was collected between 2006 and 2010.

As well as finding that always adding salt to foods was linked to a higher risk of premature death, the researchers found that these risks tended to be reduced slightly in people who ate more fruit and vegetables, although these results were not statistically significant.

“We were not surprised by this finding as fruits and vegetables are major sources of potassium, which has protective effects and is associated with a lower risk of premature death,” said Prof. Qi.

Should we stop seasoning our meals?

Assessing salt intake is notoriously difficult as pre-prepared and processed foods have high levels of salt added before they even reach the table, and direct measurements by urine tests do not necessarily reflect usual behaviour.

In addition, foods that are high in salt are often accompanied by foods rich in potassium, such as fruit and vegetables, which are good for us.

Potassium is known to protect against the risk of heart diseases and metabolic diseases such as diabetes, whereas sodium increases the risk of conditions such as cancer, high blood pressure, and stroke.

For these reasons, the researchers focused their analysis on whether or not people added salt to their meals, independent of any salt added during cooking.

“Adding salt to foods at the table is a common eating behaviour that is directly related to an individual’s long-term preference for salty-tasting foods and habitual salt intake,” said Prof. Qi.

“In the Western diet, adding salt at the table accounts for 6-20 per cent of total salt intake and provides a unique way to evaluate the association between habitual sodium intake and the risk of death”.

However, the authors of the study cautioned against drawing hasty conclusions.

“Because our study is the first to report a relation between adding salt to foods and mortality, further studies are needed to validate the findings before making recommendations,” said Prof. Qi.

Taking the research with a pinch of salt

Entirely removing salt from the diet remains controversial, according to Professor Annika Rosengren, a senior researcher at the University of Gothenburg who was not involved in the research.

“Given the various indications that a very low intake of sodium may not be beneficial, or even harmful, it is important to distinguish between recommendations on an individual basis and actions on a population level,” she wrote in an editorial accompanying the study.

“This study has many strengths but also some limitations, not least that participants in the UK Biobank are very unrepresentative – only about 10 per cent of those invited participated and they were older, richer, and less ethnically diverse than the population.”

However, people at high risk of heart disease should probably cut down their salt intake, and “not adding extra salt to already prepared foods is one way of achieving this,” she added.

Healthy people consuming what constitutes “normal levels of ordinary salt” should not worry too much about their salt intake, but “it is still true that many people consume too much,”, said Martin McKee, a professor of European public health and research director at the European Observatory on Health Systems and Policies at the London School of Hygiene and Tropical Medicine.

“This study has many strengths but also some limitations, not least that participants in the UK Biobank are very unrepresentative – only about 10 per cent of those invited participated and they were older, richer, and less ethnically diverse than the population,” McKee told Euronews Next.

“Taking the evidence as a whole, it seems that the challenge is to find the right level of salt in the diet, as other studies, especially those that include very diverse populations, find a u-shaped relationship: The risk increases when the value is either too low or too high, and is lowest in the middle”.

How much salt is too much salt?

Most people consume too much salt – on average 9-12 grams per day, or around twice the recommended maximum intake, according to the World Health Organization.

The WHO recommends that adults consume less than 5 g (just under a teaspoon) of salt per day, to help reduce blood pressure and risks of cardiovascular disease, stroke, and coronary heart attack.

“An estimated 2.5 million deaths could be prevented each year if global salt consumption were reduced to the recommended level.”

Meanwhile, the recommended maximum intake of salt for adults should be adjusted downward for children aged two to 15 years, based on their energy requirements.

At home, salt consumption can be reduced simply by not having a salt shaker on the table, limiting the consumption of salty snacks such as crisps, and choosing products with lower sodium content, the WHO says.

The UN health agency adds that measures that aim to cut down on people’s intake of salt are cheap yet highly effective – from adapting health regulations to promoting low-salt products and educating the public.

“Key salt reduction measures will generate an extra year of healthy life for a cost that falls below the average annual income or gross domestic product per person,” it says.

“An estimated 2.5 million deaths could be prevented each year if global salt consumption were reduced to the recommended level”.