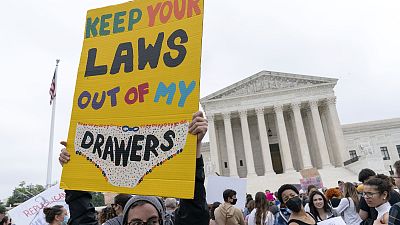 Europe is feeling the political shockwaves from the US Supreme Court’s reversal of women’s reproductive rights.

Campaigners have been stunned by the court's decision to overrule the landmark Roe v Wade case which legalised abortion nationwide in 1973. The move could lead to the return of abortion bans in roughly half of the country's states.

"It's a sad day for the court and the country," Biden said in a White House speech on Friday, calling the decision "cruel" and saying it takes America back 150 years.

Some campaigners for women’s rights feel what is happening in the US is being reflected in some parts of Europe.

"We do need to be aware of the forces in the world that are trying to roll back progress. This attack on women’s bodies is intimately interconnected with the attack on the rule of law, democracy, and freedom," said Caroline Hickson, European Network Regional Director at International Planned Parenthood Federation (IPPF).

In an interview with Euronews Next in May, she said the tactics being used by those who want to roll back human rights in the US were being used in Europe too.

Europe: A bastion of freedom to choose?

There has been a major pushback against women’s rights in one European country in recent years, with Poland enforcing a near-total ban on abortions in January 2021.

The country’s constitutional court ruled that abortion on grounds of "severe and irreversible foetal defect or incurable illness that threatens the foetus' life" was unconstitutional.

This was the basis for more than 90 percent of the approximately 1,000 legal abortions performed in the country each year, according to Human Rights Watch.

The ruling has been widely condemned as an attack on fundamental rights, with both the European Court of Human Rights and the European Commission stating it did not meet fair trial requirements due to a lack of independence from the government.

That ruling came as the COVID-19 pandemic restrictions made travel for abortions - which is what many women still have to do in certain parts of Europe - almost impossible.

Women's rights are often the first point of entry to roll back the rule of law, and democracy.

The ruling led to mass protests, which Hickson says shows a similarity with what is happening now in the US.

"In common with the US, the vast majority of populations do not support banning abortion. What seems to be clear is the forces pushing against gender equality and women’s rights and rule of law are not in tune with the people of those countries," she said.

She also cited how the right-wing government in Hungary has attempted to make legal abortions harder to obtain, amid what the EU has described as an ongoing assault on the rule of law and human rights in the country.

"Something similar is going on with reproductive rights being used as a wedge issue in countries that are pushing towards autocracy. Women's rights are often the first point of entry to roll back the rule of law, and democracy," she said.

Another country also stands out in stark contrast to the vast majority within Europe. Abortion is still illegal in all circumstances in Malta.

Last week, a pregnant American woman who suffered an incomplete miscarriage while on holiday on the island had to seek treatment in Spain because Maltese law strictly prohibits abortion, despite her facing the risk of sepsis or haemorrhaging.

But Hickson says there are positive signs of coming change in Malta, as well as progress across the continent.

The 2018 referendum in Ireland that led to the legalisation of abortion was hailed as a historic moment, showing rapid progress in a country that traditionally has a strong Catholic identity.

Hickson argues that what happened in Ireland is giving hope to activists in other countries, like Malta, where she says there is now a concerted effort to change the law.

"For a long time it wasn’t even something that could be discussed, but what happened in Ireland has galvanised people to realise you can act," she said.

In February this year, France extended the deadline for abortions from 12 to 14 weeks, giving people more time to voluntarily terminate their pregnancy amid a shortage of doctors and the steady closure of recognised abortion centres.

Some 3,000 French women are forced to go abroad each year to have an abortion because they have exceeded the legal time limit, according to campaigners.

And while the Polish government was making things as hard as possible for women who needed an abortion during the pandemic, the UK and Ireland approved telemedicine for early medical abortion, ensuring that women and girls had the option to take an abortion pill at home, without visiting a clinic.

For Hickson, the Roe v Wade debate in the US is a wake-up call for campaigners everywhere.

"The more pushback there is, the more realisation there is as to the fragility of the progress we've achieved, and the need to protect it and the need to advance it," she said.