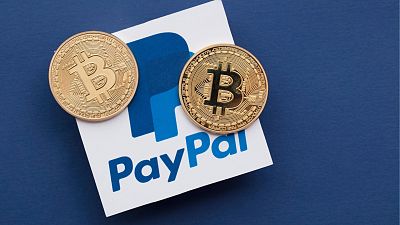 PayPal has been pushing to include cryptocurrencies in its services.   -   Copyright  Canva
By Pascale Davies  •  Updated: 09/06/2022

Some PayPal customers can now move their cryptocurrencies such as Bitcoin from their accounts to external wallets and exchanges.

PayPal and its Venmo app are used by hundreds of millions of people all over the world to move money.

The new service means that PayPal customers can also send crypto to other PayPal users in seconds with no fees or network charges.

In October 2020, the company started allowing customers to buy, sell and hold Bitcoin, Ethereum and Litecoin. However, they could not move crypto holdings off its platform - until now.

"This feature has been consistently ranked by users as one of the most requested enhancements since we began offering the purchase of crypto on our platform," Jose Fernandez da Ponte, SVP and general manager of blockchain, crypto, and digital currencies at PayPal, said in a statement.

PayPal has been pushing to include cryptocurrencies in its services.

In March last year, PayPal launched a feature that allowed customers to pay with crypto assets across millions of online businesses. It also said earlier this year it was exploring the launch of its own stablecoin, which has been dubbed PayPal Coin.

Euronews Next reached out to PayPal asking if it would offer the new feature to users in Europe. The company declined to comment on future plans.

Forget Web3. Is Web5 the future of the Internet?