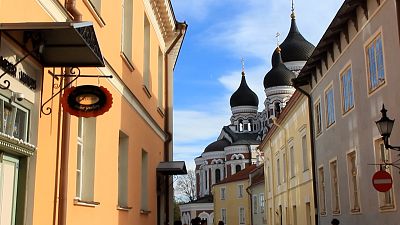 Estonia is now getting tough on how it regulates its digital assets and will bring in new rules this month,   -   Copyright  Euronews
By Pascale Davies  •  Updated: 20/06/2022

Small but tech-mighty Estonia was one of Europe’s leading destinations for cryptocurrency companies.

But the Baltic nation is now getting tough on how it regulates its digital assets and will bring in new rules this month, which some say could deter Estonia’s thriving start-up scene.

The country’s new rules come into force as Europe cranks up crypto regulation and as policymakers become warier of cryptos in the wake of the collapse of the stablecoin TerraUSD and its sister token Luna.

“Cryptocurrency currencies as an asset class is clearly a very, very volatile asset. So I think in the first place, people who invest in it need really to understand what kind of risks they are taking,” Andres Sutt, Estonia’s Minister of Entrepreneurship and Information Technology, said in an interview with Euronews Next.

“And I'm afraid not everybody understands it”.

Estonia’s new regulations mark a sharp U-turn for a country that has a population of just 1.3 million yet last year was home to more than half the world’s registered virtual-asset service providers (VASPs) last year.

The new rules, which begin on June 15, mean Estonian crypto companies will need to meet new transparency requirements; they can no longer have anonymous accounts and they must have a capital of at least €250,000.

While some criticise the new regulations as too heavy-handed, Estonia’s government says they are necessary.

“I don't think we have become too tough, but what we are focussing on is on the quality, not quantity [of crypto companies] and the quality means, first and foremost, those companies who actually want to innovate the field, or want to, to do a legitimate business,” said Sutt.

I think in the first place, people who invest in it need really to understand what kind of risks they are taking.

While Estonia’s Ministry of Finance admits the new rules could reshape the country’s tech scene, it is adamant it is being fair.

“There are risks that some service providers should close their shops but on the other hand, I think we still in general, we are a very technology-friendly country,” Kristen Leppik, from Estonia’s financial services department, told Euronews Next.

The new rules essentially shore up a licensing process that many in Estonia’s crypto scene believe was too loose. The so-called licenses allow you to offer two types of crypto services: wallet or exchange.

‘It's not a licence, it's nothing’

In 2017, Estonia became the first country to start issuing crypto licenses, which allowed hundreds of companies to get an Estonian license very easily and operate anywhere in the world.

“In the beginning, the regulation was so soft that everybody applying actually received the licence. It was very cheap, it was very easy,” Raido Saar, head of the Estonian Cryptocurrency Association, told Euronews Next.

“[The regulation was really weak because I think that our government didn't take it so seriously”.

While attending a fintech event in London, Saar said he was looking to open a banking account there for his company.

“When I said that I had an Estonian crypto licence. Actually the banker started to laugh. ‘It's not a licence, it's nothing’”.

“Basically this licence turned out to be not useful for companies who are trying to do their business honestly,” Saar said.

When I said that I had an Estonian crypto licence. Actually, the banker started to laugh. ‘It's not a licence, it's nothing.

Over the years, Estonia issued around 4,000 of these licences. But major problems emerged.

Some companies were able to make a business out of selling shell companies and a handful of others took advantage of the government's e-residency scheme, a programme that lets businesses around the world incorporate in the country remotely.

This combined with a 2018 money-laundering scandal involving Dankse Bank and allegations of up to $200 billion (€187 billion) in suspicious flows marked the period when the government started getting serious on crypto regulation.

Clamping down on crypto

“From that moment on, actually, we had [a] regulator or controlling party of the licences [who] at least understands the financial world,” Saar said.

The main institution putting the government’s crypto rules in place is the Financial Intelligence Unit (FIU), which looked deeply into the crypto companies that have an Estonian license.

It found huge illegal funds were moving, not through Estonia itself but through blockchain and shell companies behind them that were registered in but did not even have an office or board member in the country.

The FIU has now revoked the majority of crypto licenses and now more than 300 remain.

“I have talked so much with my colleagues from other EU countries and we have seen that they are, right now, almost three years behind us, that they are in a place where we were in 2017,” he added.

People have a lot of money in their pockets. So right now, with respect to VASPs, we see a growing trend that they are being used for simple fraud.

“They see an increase in the number of VASPs and they see that they are incapable of mitigating the risk that they are facing with the threats, the money laundering, terrorism financing threats, even the sanctions threats that we are talking about, in this case, the Russian military aggression against Ukraine.

However, he noted that the biggest problem facing Estonia’s crypto scene is not its neighbour Russia, money laundering or financing terrorism, but inflation.

“People have a lot of money in their pockets. So right now, with respect to VASPs, we see a growing trend that they are being used for simple fraud, investment fraud and just defrauding people for money,” he said.

But the crypto industry says Estonia’s new rules are too heavy-handed and have pushed investors to put their resources elsewhere.

“If we forbid everything and we make it too safe, then we actually are killing some part of innovation as well,” said Saar.

“If those companies are helped, they will stay in Estonia. But if you kill them with terms they are not able to comply with [regulation], of course, they will leave Estonia. And with that, a part of the brains leave Estonia”.

Saar said his organisation has worked with the FIU and the Ministry of Finance and said what was lacking from the regulation was a “real touch with the industry itself”.

While he agrees regulation is needed to prevent fraud, he says it should be done with the technology used in crypto such as blockchain analytics tools.

“It may take time, but this is more likely to catch the criminals than in the case of banking, where basically at one moment, if the bank or correspondent bank is not following the rules, then basically the traces are in the sand, you're in the water, and you can find them anymore,” he said.

As for protecting people from losing money, Saar is less sympathetic. He previously purchased 20,000 tokens which are now worth about €50.

“With freedom comes responsibility. Bitcoin is a tool for liberty, but at the same time, if you are free, you must take responsibility,” he said.

“If you are greedy, if you want to make a million bucks in a minute and you just are too lazy to read or study yourself about what you are investing in, then sorry about this is a personal responsibility. I don't think the government is supposed to protect those people who are too lazy themselves to study and be careful”.

How is the EU regulating cryptos?

However, with the crypto market as volatile as it is right now, the European Union is putting together a regulatory framework for a crypto licensing regime for the bloc, called the Markets in Crypto Assets, better known by its acronym MiCA.

But Estonian officials say the legislation should come in sooner.

“We are in a place where people have so much money to spend and they are not spending it wisely and they are investing in places that they shouldn't invest at the moment. And at one point they will lose their assets,” said Mäeker.

“And then there would be a huge debate in the EU. I mean, what should we do? But right now, the regulation is there and it should be enforced much, much quicker, I think”.