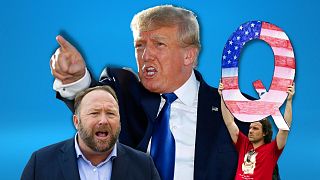 Donald Trump, Alex Jones and QAnon supporters are amongst those expected to make a return to Twitter.   -   Copyright  Canva/Associated Press
By Euronews and AP  •  Updated: 01/05/2022

QAnon loyalists, COVID-19 deniers, neo-Nazis, and a former American president: the list of people banned from Twitter is long, but their exile could soon come to an end if Elon Musk's $44 billion (€41 billion) offer for the platform is approved.

Musk, the world’s richest man and the owner of SpaceX and Tesla, calls himself a "free speech absolutist" who believes in allowing any content that doesn't run afoul of the law.

While Musk hasn't offered specifics about how he would run the platform, his musings are prompting celebrations from some of those muzzled by Twitter, even as they alarm internet safety experts who predict a rise in harassment, hate speech, and misinformation about topics like vaccines and elections.

"There’s no reason why these folks wouldn’t want to be in this space," said Jaime Longoria, manager of research and training at the Disinfo Defense League, a non-profit that works with local organisations to combat the effects of misinformation.

"Ultimately I think Elon’s premise to save the public square is going to create a square that nobody wants to be in".

From former President Donald Trump to conspiracy theorist Alex Jones to white supremacist David Duke, here's a look at who might be coming back to Twitter if Musk’s offer to buy it is approved.

Trump said he won't return to Twitter even if Musk lifts the ban imposed following the deadly attack on the US Capitol onJanuary 6, 2021. The platform cited concerns of further incitement to violence.

Following his banishment, Trump created his own platform, Truth Social, which launched earlier this year.

"I am not going on Twitter. I am going to stay on Truth," Trump told Fox News this past week.

"I hope Elon buys Twitter because he’ll make improvements to it and he is a good man, but I am going to be staying on Truth".

If Donald Trump is the presidential nominee for the Republican Party in 2024, it’s almost unthinkable that he won’t return to Twitter the moment he has the opportunity to do so.

Trump built one of the world's largest Twitter followings before his suspension, using his account to demean critics, spread lies about the 2020 election, and amplify potentially dangerous misinformation about COVID-19.

Despite what the former president said, returning to Twitter may be too tempting to resist, said Emerson Brooking, resident fellow at the Digital Forensic Research Lab of the Atlantic Council.

"If Donald Trump is the presidential nominee for the Republican Party in 2024, it’s almost unthinkable that he won’t return to Twitter the moment he has the opportunity to do so," Brooking said.

Two former top advisers to Trump - Steve Bannon and Roger Stone - were also banned by Twitter after repeatedly violating their rules. Bannon was kicked off for calling for the beheading of Dr Anthony Fauci, the US' leading infectious disease specialist.

Stone, who was ultimately suspended for a series of vulgar threats against CNN journalists, tried to create a new Twitter account Thursday but was quickly re-suspended.

Other Trump allies kicked off Twitter include Michael Flynn and Sidney Powell, Lin Wood, and Republican congresswoman Marjorie Taylor Greene, who was permanently banned in January for repeatedly spreading misinformation about COVID-19 and vaccine safety.

David Duke and the Proud Boys - the spectre of white supremacists

Perhaps the trickiest challenge for Musk will be content that, while legal, preaches hate based on things like race, gender, sexual orientation, or religion.

White supremacists banned by Twitter include Duke and the Proud Boys organisation, along with far-right trolls like one who goes by the name Baked Alaska, who promoted anti-Semitic tropes and faces charges stemming from his involvement in the January 6 attack on the US Capitol.

Twitter's efforts to police hate speech have had mixed results. While some extremist leaders have been vanquished, a quick search of the platform turns up numerous racist slurs and attacks.

Several admitted white supremacists still on Twitter celebrated news of Musk's interest in the platform, predicting this ownership will mean looser rules. "We are liberated!" one wrote this week.

"The extremists are celebrating," tweeted Jonathan Greenblatt, CEO of the Anti-Defamation League. "They believe he will usher in a 'new era' on Twitter & that they’ll return to the platform. This is dangerous".

Twitter began cracking down on QAnon content on its platform years ago and accelerated the process following the attack on the Capitol.

More than 150,000 accounts had been suspended as of last year, according to the company's latest update.

The mob that stormed the Capitol included some believers. Now, some of them are eager to get back on Twitter.

"The Twitter deal is done," Ron Watkins, a prominent QAnon leader, wrote on the platform Telegram. Watkins' Twitter account was spiked last year. "Banned accounts will be restored,” he predicted.

Other conspiracy theorists have also felt Twitter's sting, though usually only when their stated beliefs have pushed over into hate or harassment.

David Icke was kicked off the platform two years ago for spreading misinformation about COVID-19, including claims that Jews and 5G towers were behind the pandemic.

Icke is a prominent advocate of the belief that a race of lizard people have taken over the Earth by posing as human leaders.

Alex Jones, the creator of Infowars, was permanently banned in 2018 for abusive behavior.

Jones recently lost a defamation case filed by the parents of children killed in the 2012 Newtown, Connecticut, school shooting over Jones' repeated claims that the shooting was fake.

Trump may not be the only user kicked off Twitter who ends up happy in a new home.

Other new platforms, like Gab, GETTR, and Parler, have grown in recent years by catering to conservative and far-right users who dislike Twitter and Facebook’s moderation policies.

The new sites have little to no moderation, meaning Nazi imagery, homophobic threats and misogynistic content can be easily found alongside conversations about U.S. politics and culture.

After Musk’s purchase offer, Gab CEO Andrew Torba predicted the billionaire will struggle to realize his vision for Twitter.

While Trump may be sticking with his own new platform for competitive reasons, other conservatives may not be immediately tempted by Musk’s promises of free speech absolutism. Twitter’s employees, for one, may put up a fight, according to Torba.

Parler CEO George Farmer sounded a similar note in a message to users. "We are going nowhere," Farmer wrote.