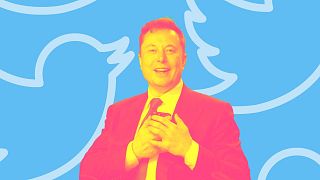 Elon Musk's offer to buy Twitter was accepted by the social media company's directors on Monday   -  Copyright  AP / Euronews Next via Canva
By Tom Bateman  with Reuters & AP  •  Updated: 26/04/2022

On Monday, the news broke that Tesla CEO and world's richest man Elon Musk had agreed a deal to buy Twitter.

Any takeover will be subject to due diligence on Musk's side, and on the current Twitter shareholders voting to sell their stakes for the price he's offering.

If the company's shareholders agree to sell their stakes then Twitter, which has been a publicly-traded company since 2013, will revert to private ownership with Musk in charge.

Here's what could happen next.

In a statement announcing the acquisition, Musk emphasised his commitment to free speech, calling it the "bedrock of a functioning democracy".

"Twitter is the digital town square where matters vital to the future of humanity are debated," he added.

While details are thin, Musk hinted at some potential future changes, including making Twitter's algorithms public to increase the platform's transparency.

A potential major change could come through his stated goal of "defeating the spam bots, and authenticating all humans". This could mean that Twitter users will have to provide an ID to use the service - something the company has previously said would not help to tackle abuse and harassment.

“This move just shows how effective (moderation features) have been to annoy those in power,” said Kirsten Martin, a professor of technology ethics at the University of Notre Dame in the US.

"I would be worried as to how this would change Twitter’s values," she said.

I hope that even my worst critics remain on Twitter, because that is what free speech means

Under self-described "free-speech absolutist" Musk, Twitter could also loosen its content moderation policies, a move that raises the prospect of the platform undoing its highest-profile ban.

Asked during a recent TED interview if there were any limits to his notion of "free speech," Musk said Twitter would abide by national laws that restrict speech around the world. Beyond that, he said, he’d be "very reluctant" to delete posts or permanently ban users who violate the company's rules.

"I think we want it to really have the perception and reality that speech is as free as reasonably possible," he said.

Musk's views on banning users could open the door to a comeback for former US president Donald Trump, a prolific and high-profile Twitter user with almost 90 million followers at the time he was banned from the platform in January 2021.

Trump's permanent suspension came two days after the Capitol riots, where supporters of the Republican president attacked police at the seat of America's legislative branch.

I am not going on Twitter, I am going to stay on Truth.

Trump's ban was due to "the risk of further incitement of violence," Twitter said at the time.

Trump himself has said he won't return, telling US media on Monday that he was committed to his own troubled platform, Truth Social.

"I am not going on Twitter, I am going to stay on Truth," Trump told Fox News.

"I hope Elon buys Twitter because he’ll make improvements to it and he is a good man, but I am going to be staying on Truth," he said.

The Trump question was one of many that went unanswered during an internal, company-wide conference call for Twitter staff on Monday.

Many at Twitter now face a likely owner who has publicly belittled them, their families, their friends, or their communities.

Hours after the terms of Musk's agreement with Twitter were announced, staff reportedly asked CEO Parag Agrawal whether they would lose their jobs, and whether the platform's moderation policies would change.

"Once the deal closes, we don't know which direction the platform will go," Agrawal said, responding to a question regarding Trump.

"I believe when we have an opportunity to speak with Elon, it's a question we should address with him."

Agrawal also told employees there were no plans for layoffs, with Bret Taylor, chair of Twitter's board of directors, attempting to reassure employees that the agreement with Musk prioritised "operating continuity" until the deal was closed.

However, the Twitter CEO also conceded that the platform's future looked "uncertain" following the completion of Musk's bid.

Some staff have already taken to Twitter to air their disapproval of Musk's takeover in public, raising the prospect that the company could see a wave of departures if the deal goes through.

"Many at Twitter now face a likely owner who has publicly belittled them, their families, their friends, or their communities - not unlike a schoolyard bully," one senior engineering manager wrote.

But Twitter co-founder, board member and former CEO Jack Dorsey signalled his approval of the Musk buyout on Monday, saying it meant taking the company "back from Wall Street".

Elon’s goal of creating a platform that is “maximally trusted and broadly inclusive” is the right one. This is also @paraga’s goal, and why I chose him. Thank you both for getting the company out of an impossible situation. This is the right path...I believe it with all my heart.

"In principle, I don’t believe anyone should own or run Twitter. It wants to be a public good at a protocol level, not a company. Solving for the problem of it being a company however, Elon is the singular solution I trust," he said.

"I trust his mission to extend the light of consciousness," Dorsey added, who called Twitter "the closest thing we have to a global consciousness".

A securities filing published on April 14 when Musk made the offer to buy Twitter revealed that the billionaire did not have confidence in the company's current management.

Deeply proud of our teams and inspired by the work that has never been more important.

"If the deal doesn’t work, given that I don’t have confidence in management nor do I believe I can drive the necessary change in the public market, I would need to reconsider my position as a shareholder," Musk warned.

This lack of confidence could lead to current boss Agrawal, who only became Twitter CEO in November last year, standing down once Musk completes his acquisition.

Agrawal, previously the company's chief technology officer, made over $30 million (€28 million) in 2021 - largely in stock awards.

Estimates from research firm Equilar suggest that he could stand to receive a severance package worth around $42 million (€39.2 million) if he were to step aside within 12 months of being appointed CEO in November.

Equilar's estimate includes a year’s worth of Agrawal's base salary plus accelerated vesting of all equity awards, an Equilar spokesperson told Reuters, based on Musk’s offering price of $54.20 (€50.76) per share and terms in the company's recent proxy statement.

Agrawal has yet to comment publicly on the deal, beyond a brief statement issued on Monday.

"Twitter has a purpose and relevance that impacts the entire world. Deeply proud of our teams and inspired by the work that has never been more important," he said.