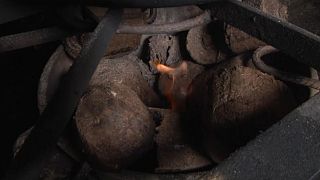 A social enterprise is turning human waste into an alternative to coal, which can be used for anything from heating homes to cooking food.

Sanivation, a company based 100 km from Kenya’s capital Nairobi, is finding the business of transforming unpleasant waste into fuel a profitable one.

The waste is treated at high temperatures to kill bacteria, before being mixed with sawdust and made into briquettes, traditionally compressed blocks of coal or other combustibles for helping to start a fire.

While it was initially a hard sell for the company, Sanivation’s factory manager Paul Manda says some people now use the briquettes for barbecuing.

"Initially, it was very hard for us to scale-up as we used to make a home-based product. People used to think that it would be smelling a lot but that wasn't the case because we used to treat the poop very well to make the product, and people would even use it for barbecue," he said.

He added that the product was “picked up in the market much quicker” than expected, and the company is currently selling more than 120 tonnes as it tries to keep up with demand.

There are environmental benefits to creating this kind of fuel.

"The use of this fuel is very important to the environment in the fact that for each tonne that we are going to use we are saving 33 trees. Remember we are also taking a useless product that people used to just throw away, and maybe it was unsafely managed," said Manda.

According to the Water.org charity, 41 per cent of Kenyans lack access to basic sanitation solutions.

WHO and UNICEF’s joint water programme estimates 8.5 per cent of the population there practiced open defecation in 2020.

One of those is the Larmona flower farm, which cooks food on site for their employees and used to use charcoal and firewood.

The briquettes are cheaper, and manager Mary Wangui says there are further benefits.

She says the smoke from the briquettes has less effect on employees, and even the cooking pots last longer being cooked over this fuel.

“Also if you compare from the normal charcoal and from briquettes, the heat from the briquettes lasts longer, which means we use less compared to what we used to use there earlier," she added.

According to Kenya Forest Service, charcoal provides 82 percent of the urban population and 34 percent of rural households with energy.

"The briquettes are a good alternative to charcoal and wood and especially they are made from mostly waste material so they reduce on the trees that are being cut," explains Nickson Otieno, a sustainability expert and CEO at Niko Green.

"Number two, if well made, they burn efficiently so they release less emissions of bad air (carbon). So that has a very good health impact but also environmental impact compared to how the charcoal or the wood burns. Which is not efficient".

Through the initiative, the company has been able to create jobs, as well as convince established organisations to opt for an environmentally friendly source of energy.