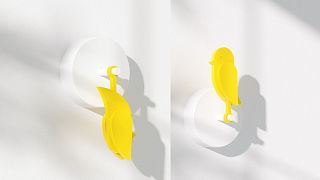 Canairi is a fresh air monitor that measures CO2 levels and prompts you to air out the room when the bird falls down   -   Copyright  Composite image / Albert Sommerlund
By Natalie Huet  •  Updated: 29/03/2022

We know the COVID-19 pandemic is not quite over yet, and that viruses and germs thrive in poorly ventilated spaces.

But how often do we actually remember to open those windows and air out the room?

Two young Danes think they may have found the perfect design to finally draw our attention to air quality: a bright, stylish canary that keels over as soon as carbon dioxide levels hit a certain threshold.

“A creative driver for us was to see how we could solve an invisible problem with a visible solution,” Hans Høite Augustenborg, co-founder and designer of the Canairi fresh air monitor, told Euronews Next.

There are already a lot of CO2 sensors on the market, he admits - but they’re rarely inspiring.

Canary in a coal mine

Augustenborg was inspired by the canaries that early 20th century miners brought with them underground to detect carbon monoxide and other toxic gases.

“Mom, the bird is dead. We need to open the windows!

The 28-year-old, who has a background in advertising, initially envisioned a canary that started singing or lighting up when the air quality turned bad - but he had a hunch that an analogue design would spark a stronger response from users.

“There are so many digital things nowadays that you see something that can move a little bit, it's more wowing than a new app,” he explained.

Together with his longtime friend and associate Andreas Kofoed Sørensen, they came up with the falling canary design and started testing it in homes and offices six months ago.

“We really wanted to make a product that is appealing to the user. That's also why it's wireless. There's not like an ugly wire that needs to hang underneath it. We like to see it as a design product you want to hang next to a nice poster,” Augustenborg said.

The pair have been communicating about their device on social media and aim to crowdfund production on Kickstarter starting April 5, with early birds able to pre-order a Canairi for €95.

So far, feedback has been encouraging, they say, with over 3,000 registrations and nearly a dozen retailers interested in selling the device in physical shops and online.

Augustenborg said one family started testing their product because the parents were having a hard time getting their children to understand the importance of airing out the house even when it was very cold outside.

On the first day of testing, he said, the kids shouted: “Mom, the bird is dead. We need to open the windows!”

“It's so easy for kids to understand,” he concluded.