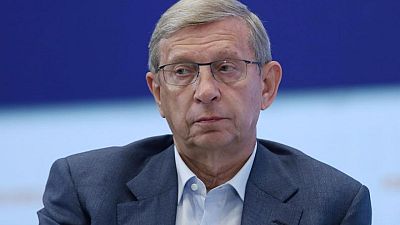 LONDON – Russian billionaire Vladimir Yevtushenkov gave up formal shareholder control of the Sistema conglomerate which he founded three decades ago by transferring a 10% stake to his son after Britain imposed sanctions over Russia’s war in Ukraine.

Yevtushenkov, an engineer who made a fortune in banking and telecoms in the years following the 1991 fall of the Soviet Union, cut his stake to 49.2 percent in Sistema while his son, Felix, increased his stake to 15.2%.

Britain imposed an asset freeze on Yevtushenkov on Wednesday as part of a Western attempt to punish President Vladimir Putin for the Feb. 24 invasion of Ukraine. Britain cast Yevtushenkov as an “oligarch”.

Sistema said it “will continue to duly fulfil all of its obligations towards its creditors, investors, employees and partners.”

But the conglomerate said that such high levels of uncertainty meant it could not “rule out the further possibility of a material adverse impact on the operations and financial results of the Group’s companies and, as a result, on the Corporation’s financial results.”

Sistema, whose businesses span telecoms, technology, financial services, retail, paper, agriculture, real estate, tourism and medical services, said the sanctions on Yevtushenkov were personal and did not target his companies.

Since the Kremlin sent troops into Ukraine on Feb. 24, Western governments have imposed sweeping sanctions against Russian companies and individuals in an effort to force Moscow to withdraw.

These have resulted in the seizure of yachts and other luxury assets, disrupted supply chains and hammered the Russian economy.

Russia’s economy is on track to contract this year by more than at any other time since the years following the 1991 fall of the Soviet Union as Western sanctions stoke inflation and capital flight while choking trade.

Putin says the “special military operation” in Ukraine is necessary because the United States was using Ukraine to threaten Russia and Moscow had to act to defend Russian-speaking people in Ukraine against persecution.

Ukraine says it is fighting against an imperial-style land grab and dismisses Putin’s claims of genocide as nonsense.