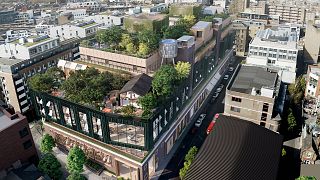 A view of Roots in the Sky, a project set to be London's first office building with an urban forest rooftop.   -  Copyright  Courtesy of Fabrix
By Gaia Lamperti  •  Updated: 14/04/2022

In the post-COVID era, for people to willingly go back to work in the office, the benefits have to outweigh the downsides.

So how are architects and developers coming up with office designs that can entice them?

Those shaking things up say the focus is on prioritising workers’ wellness and safety while scoring high on environmental standards.

In a top European tech and design hub like London, the trend is picking up pace. Tech giants such as Google and Meta are splurging on their next-generation headquarters, and corporations like Citibank are revamping their offices with an emphasis on flexible spaces and greenery.

Following in their footsteps, all around the British capital, new developments offer a glimpse of what workspaces may look like in the future.

South of the Thames, in the district of Southwark, an innovative office scheme has been breaking records.

It was designed to recreate ideal working conditions for its users, improving their productivity and promoting physical and mental well-being for their return to the office.

A central sensor platform functioning as the building’s “brain”, equipped with an Internet of Things (IoT) technology, can monitor internal and external environment variables such as air quality, density of occupancy, temperature, lights and noise levels to reduce energy use and maximise performance.

Not too far away, a soon-to-be-completed office scheme on Bankside is set to become one of the UK’s first all-electric, net-zero offices in operation, when it will open its doors this summer.

Arbor, which presents itself as a future-proof office complex, was designed to “offer forward-thinking companies a smart, sustainable workplace next to the Thames,” said Felicity Masefield, development executive and sustainability lead at Native Land, the scheme’s developer.

During the pandemic, the office invaded the home, so we thought we should flip that on its head, and have the home invade the office

All the buildings on Arbor’s site are part of a fifth-generation energy-sharing network, extracting or rejecting energy into a single thermal network that serves the entire development. The design reduces energy usage by up to 30 per cent compared to most office buildings, Masefield said.

“We are doing this on a scale not yet seen in the UK,” she added.

The building may also one day have a digital twin - a 3D replica able to provide real-time analysis of power usage to improve its efficiency.

Meeting the needs of hybrid work

For those who’ve made it their routine to work from home, even a gradual return to the office can be a culture shock. For this reason, some recent developments have embraced a more "homey" version of the office.

FORE Partnerships, the firm behind net-zero carbon office developments, is proudly "eating their own cooking" with their new London HQ.

With its apartment-like vibes - featuring a cosy living room area, a giant dining room table, a library, and even an inviting sofa - the space looks like a living room straight out of a magazine.

“During the pandemic, the office invaded the home, so we thought we should flip that on its head, and have the home invade the office,” Basil Demeroutis, FORE’s Managing Partner, told Euronews Next.

“We found that we don’t need the office to be productive, and it’s completely upended the idea of why offices exist.”

But the space is not short of cool tech allowing workers to set up their desks wherever they want, like its gigantic 100-inch (2.5m) touch screens that can pull up Zoom with one tap and facilitate hybrid interactions with colleagues working from home.

From a special paint that neutralises greenhouse gasses to smart sensors that monitor air quality, the space has also turned into a sort of "laboratory" for the firm to continually test new concepts, technologies and products to be deployed in commercial developments.

“Office spaces must be a reflection of a company’s brand, values and purpose. That’s why people will come to the office,” Demeroutis said.

A similar tenant- and environment-friendly approach was adopted by the Gramophone Works, another complex, this time in the heart of West London, designed to offer a workspace to local creatives.

The award-winning scheme, which pioneers the use of recycled and sustainably sourced structural materials, reflects the “vibrancy and creative spirit of the area,” and combines sustainability, placemaking and aesthetics “to meet the needs of the modern worker,” said Scott O’Donnell, partner at Resolution Property, the developer behind this project.

A key takeaway for the industry after months of pandemic-induced confinement is that you can never go wrong with adding some green to the work environment.

A great example of the magic that a little green can do is the new office scheme born at 135 Bishopsgate, up until recently home to a 1980s dark and defensive frontage.

A refurbishment by Fletcher Priest Architects improved thermal performance and air circulation in the spaces, while plants and wide, lush terraces contribute to making the whole building greener and creating a new enticing public realm with pedestrian access.

“Our targeted design interventions opened up the interiors to provide enhanced daylight and replaced mechanical roof plants with garden terraces,” said project director Ed Williams, adding that 97 per cent of the building was let more than a year before completion.

And Londoners can expect more. Roots In the Sky, a 1.4-acre terrace of over 100 trees and 10,000 plants, will be the city’s first office building with an urban forest rooftop.

"This is the flagship for what tenants are demanding from a workspace post-pandemic: a world-class sustainable and healthy environment that is rooted in the local community and can be the physical embodiment of a company’s ESG ethos,” said Clive Nichol, CEO of the project developer and property investor Fabrix.

Set to be one of the largest urban roof gardens in Europe, the building will make a significant contribution not only to London’s office scene but also to the city’s ambitious targets for greening, biodiversity and sustainability.