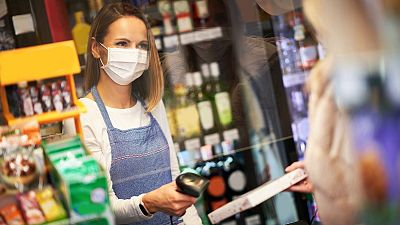 Over one-third of non-office workers are at risk of quitting within six months, a new BCG survey shows   -   Copyright  Canva
By Josephine Joly  •  Updated: 09/07/2022

They were hailed as heroes during the first COVID-19 lockdowns: employees who need to be physically present to do their jobs and who kept showing up for work despite the health risks.

Now a major new study has found many of these essential workers are not satisfied with their jobs, and over one-third of them are considering quitting within the next six months.

The survey of more than 7,000 employees across Australia, France, Germany, India, Japan, the UK, and the US, found that 37 per cent of these workers were dangerously close to resigning mainly because of a lack of career prospects, according to a report by the Boston Consulting Group (BCG).

The findings have “potentially dire” implications for fields as diverse as construction, distribution, manufacturing, health care, retail and transportation, the authors warn.

Employees across these sectors account for over three-quarters of the total workforce in most countries, and unlike office staff, these “deskless workers” simply do not have the option of going remote or enjoying more flexible schedules.

“The world saw the importance of deskless workers during the pandemic. They allowed the rest of us to remain productive while working remotely,” the authors write.

“Today, they watch after our children and our elderly; they build our bridges and operate the trucks and trains that deliver the goods we require for work and life. If they flee their jobs, we will all pay the price”.

Across all seven nations surveyed (Australia, France, Germany, India, Japan, the UK, and the US), employees aged 18 to 24 were far more likely to leave their jobs than those aged 58-65.

Nearly half of Gen Z workers (48 per cent) were at risk of quitting in the next six months, twice the share of baby boomers (24 per cent).

Japan’s deskless workers showed the weakest attachment to their jobs, with 42 per cent either planning to leave (11 per cent), undecided (24 per cent), or unwilling to make a commitment beyond six months (7 per cent).

Workers in the UK followed closely behind at 41 per cent, with a higher percentage (15 per cent) already having decided to leave their current jobs in the next six months, another 15 per cent unwilling to commit beyond six months, and 11 per cent undecided.

Among the seven countries surveyed, France had the lowest share of deskless workers already planning their exit (10 per cent), compared to 12 per cent of workers in the US and 13 per cent in Germany.

What can companies do to retain workers?

Lack of career prospects was the main reason deskless workers said they may leave their jobs. It was cited by 41 per cent of those surveyed.

Other top reasons were pay (30 per cent), lack of flexibility in where and when they work (28 per cent), work-life balance (22 per cent), and professional fulfillment (15 per cent).

Most deskless workers (56 per cent) cited their work schedules as a key sticking point, and a little around half also blamed insufficient benefits and a lack of opportunity to grow their career and learn new skills.

Many organisations are already struggling with staff shortages, and the findings are a sobering reminder that salary is no longer enough to keep workers on board.

“The costs of open positions are only going to get worse unless leaders start to materially address the reasons why employees are leaving,” said Debbie Lovich, BCG’s global leader for the future of work.

Beyond pay rises, Lovich says companies can give their workers more opportunities to learn new skills, offer them more tailored benefits and embrace new technologies that allow staff to swap shifts and have flexible schedules that better fit their needs.

“The good news is that when leaders take the time to listen and walk in the shoes of their ‘deskless’ talent they will find ideas – often low-cost ones – for how they can immediately make their employees' lives better,” she said.

Would these London office designs make you give up working from home?