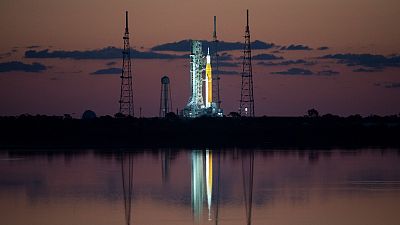 The Space Launch System (SLS) rocket with the Orion spacecraft aboard is seen atop a mobile launcher at NASA's Kennedy Space Center on Monday, April 4, 2022.   -   Copyright  Joel Kowsky/NASA via AP
By Kerry Hebden  •  Updated: 12/04/2022

NASA's Artemis I mission to the Moon has scaled back its plans for pre-launch testing after a spate of glitches and delays.

A countdown rehearsal and fuelling test for its giant Space Launch System (SLS) rocket was due to take place on Monday after it was already called off last week, but a problematic valve thwarted the plans yet again.

Since its inception, NASA’s SLS - the huge, super heavy-lift launch vehicle that will carry astronauts to the Moon and possibly to Mars - has been beset by financial problems and delays to its construction that have pushed back its ambitious timeline for reaching the lunar surface.

Despite these setbacks and a recent lightning storm that struck protective towers at the launch pad, NASA had set its sight on a first attempt to fuel its SLS rocket and go through a practice countdown at the start of April.

However, the two-day proceedings, which are the last major tests conducted before launch and are known as a wet dress rehearsal - were cancelled shortly before they were due to begin, with NASA citing a problem with the rocket’s mobile launcher as the cause.

What is the Artemis mission?

Artemis is a human spaceflight programme led by NASA with a primary goal of returning humans to the Moon by 2025.

Together with commercial and international partners, NASA is aiming to establish a sustainable presence on the Moon that in the longer term will be used to prepare for missions to Mars, and maybe beyond.

NASA’s Space Launch System, or SLS, is the launch vehicle that will be used in the Artemis missions.

With its unprecedented power and capabilities, SLS is the only rocket that can send astronauts, the Orion multipurpose crew vehicle, plus cargo, directly to the Moon on a single launch.

With the Orion crew capsule fixed on top, the SLS stands 98m high - taller than the Statue of Liberty, but a little smaller than the 110m Saturn V rockets that powered the Apollo missions to the Moon in the late 1960s and 1970s.

What is a wet dress rehearsal?

The wet dress rehearsal is the last major test before launch. It allows the team to practice propellant loading and thoroughly check out the Artemis I rocket systems as they are exposed to cryogenics.

“Wet dress rehearsal is an opportunity to refine the countdown procedures and validate critical models and software interfaces,” NASA said in a blog post.

“The modified test will enable engineers to achieve the test objectives critical to launch success”.

This mock countdown also allows the team to drain the tanks, and to practice the timelines and procedures they will use for an actual launch.

NASA had initially declined to set a specific launch date for Artemis I, but noted at a briefing in February that it was still keeping open an option for a launch window that runs from May 7 to 21 - a timeframe that now seems unlikely.

The agency's next opportunity is a launch window that runs from June 6 -16.

Why has this rehearsal been delayed?

On April 3, NASA cited a malfunction with two fans that “needed to provide positive pressure to the enclosed areas within the mobile launcher and keep out hazardous gasses”.

Although that issue was resolved, further problems involving a vent valve that was in the wrong position, a helium check valve that was not functioning as expected, and complications surrounding helium purge pressure, have since come to light.

Helium is used for several different operations, including purging the engine, or clearing the lines, prior to loading propellants during tanking or draining them.

A check valve, on the other hand, is a type of valve that allows liquid or gas to flow in a particular direction and prevents backflow. The helium check valve is about 7.5 cm long and prevents the helium from flowing back out of the rocket.

Whether the latter two issues are related is unclear, but NASA said that instead of fully loading both stages of the rocket cryogenic liquid hydrogen and liquid oxygen during the next test, it will now focus only on adding propellants into the core stage, the largest element of the SLS launch vehicle.

This change in procedures means that tanking will now take place on Thursday (April 14), three days later than previously planned.

Is this what astronauts will use to build colonies on the Moon?