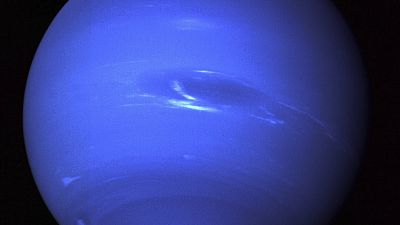 Scientists studying Neptune’s atmospheric temperature over a 17-year period have just discovered a surprising trend: the most distant of our solar system's planets is getting cooler instead of warming up.

Often referred to as one of the solar system's two ice giant planets - the other being its near-twin Uranus - Neptune, like Earth, experiences seasons as it orbits the Sun.

But unlike Earth, a season on Neptune lasts around 40 years, while one Neptune year lasts 165 Earth years; that is a long time to wait to see what changes might occur as the seasons pass.

Since 2005, Neptune’s southern hemisphere has been experiencing summertime. Keen to see how temperatures are changing following the southern summer solstice, an international team of astronomers have been using ground-based telescopes to monitor the infrared light emitted from a layer of Neptune’s atmosphere called the stratosphere.

However, after piecing together overall trends in the planet’s temperature from the images, the team, headed by Michael Roman at the University of Leicester, UK, spotted something curious.

Despite the onset of southern summer, the globally averaged temperature of Neptune had dropped by 8C between 2003 and 2018, meaning that the planet had gradually cooled over the last two decades, not warmed up as expected.

“This change was unexpected,” Roman said in a statement. “Since we have been observing Neptune during its early southern summer, we expected temperatures to be slowly growing warmer, not colder.”

Stranger still, the team also discovered that between 2018 and 2020, Neptune’s south pole experienced a dramatic warming, with temperatures rising rapidly by 11C.

It’s unusual because Neptune is located about 30 times farther away from the sun than Earth is, therefore only about one-thousandth of the sunlight received by our planet reaches this ice giant. This makes for a very cold world, with an average temperature of about minus 220C.

Since we have been observing Neptune during its early southern summer, we expected temperatures to be slowly growing warmer, not colder.

In spite of these freezing conditions, back in 2007, astronomers observed that Neptune's south pole was much hotter than the rest of the planet – a feature that was allowing methane to escape out of the planet’s deep atmosphere.

But the researchers said such rapid polar warming had never been observed before.

“Our data cover less than half of a Neptune season, so no one was expecting to see large and rapid changes,” said co-author Glenn Orton, at Caltech’s Jet Propulsion Laboratory.

What might be causing these temperature variations is unknown, but the team said it could be down to changes in Neptune’s stratospheric chemistry or something as simple as random weather patterns.

It could even be due to the solar cycle which is heading towards maximum activity in 2025.

The researchers now hope that future observatories such as ESO’s Extremely Large Telescope (ELT) or the James Webb Space Telescope – which will be able to provide unprecedented new data on Neptune’s atmosphere when it becomes operational – will help explain these fluctuations in the coming years.

“I think Neptune is itself very intriguing to many of us because we still know so little about it,” Roman said.

“This all points towards a more complicated picture of Neptune’s atmosphere and how it changes with time.”

The findings were published on Monday in The Planetary Science Journal.