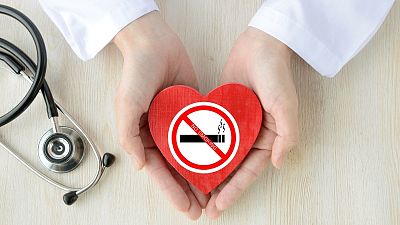 Smokers who have suffered from heart disease could gain five healthy years by quitting smoking, according to a new study.

The research found smokers would get almost the same benefit from quitting smoking as those who are put on a multi-medicine regime.

The findings, presented at a congress of the European Society of Cardiology, included patients aged 45 and older, who persisted smoking for more than six months after acute coronary syndrome (such as a heart attack) or bypass surgery.

It also looked at those patients who quit smoking altogether after these health events, with data from 989 patients used in total.

Researchers calculated the gain in healthy years - without heart attack or stroke - in both types of patient.

They found the estimated benefit of quitting smoking appeared to be comparable to using all three pharmaceutical treatments.

“This analysis focused on smokers who had experienced a heart attack and/or undergone stent implantation or bypass surgery,” study author Dr Tinka Van Trier of Amsterdam University Medical Centre said in a statement.

“This group is at particularly high risk of having another heart attack or a stroke and stopping smoking is potentially the most effective preventive action.”

She added that the benefits of quitting smoking “are even greater than we realised”.

“Our study shows that kicking the habit appears to be as effective as taking three medications for preventing heart attacks and strokes in those with a prior heart attack or procedure to open blocked arteries. Patients could gain nearly five years of healthy life.”

She added that the analysis didn’t take into account other advantages of quitting smoking, such as improved outcomes regarding respiratory illnesses, cancer, and longevity.

“Smoking cessation remains a cornerstone of preventing heart attacks and strokes and improving overall health at any time, including after a heart attack and at any age,” she said.

"We know that cigarette smoking is responsible for 50 per cent of all avoidable deaths in smokers, of which half are due to cardiovascular disease.”

Is modifying the genes of our cats the way to solve pet allergies?