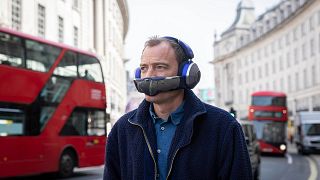 Known for its home appliances like vacuum cleaners and air purifiers, Dyson is launching its first piece of wearable tech in the form of wireless headphones that have an air filtration system built in.

The company says its Dyson Zone product is aimed at millions of city dwellers worldwide who are exposed to high levels of airborne pollutants and excessive noise.

Each cup of the over-ear Bluetooth headphones contains a compressor which draws air through electrostatically-charged filters, trapping particulates.

The filters can also cut out common pollutants like nitrogen dioxide and sulphur dioxide, Dyson said.

The purified air is then passed through a detachable visor that sits above the wearer's mouth and nose, creating a "zone" of clean air for them to breathe.

Arguably, it also makes you look quite a lot like Bane, the Batman villain played by Tom Hardy in the 2012 film 'The Dark Knight Rises'.

"Air pollution is a global problem – it affects us everywhere we go. In our homes, at school, at work and as we travel, whether on foot, on a bike or by public or private transport," the Dyson Zone's chief engineer Jake Dyson said.

Last year, the World Health Organization (WHO) estimated that in 2019, 99 per cent of people around the world were living in places where air pollution exceeded the recommended limits.

Air pollution in both urban and rural areas is thought to have contributed to 4.2 million premature deaths worldwide in 2016 alone, the WHO said.

Development of Dyson's combination headphone-air purifier took six years, the company said, in a process that saw it evolve into its current form from a kind of snorkel paired with a backpack that contained the filtration system.

While the Dyson Zone may have an unusual design, the introduction of active filtration in a wearable form could further expand an already-booming consumer market.

Sales of air purifiers grew significantly during the COVID-19 pandemic.

In the United States, the air purifier market expanded 57 per cent in 2020, according to figures from research firm Verify Markets.

Dyson's foray into wearable air purifiers will not be available to buy until autumn this year, the company said.

It did not give details on pricing, but did say the Dyson Zone would have an "extremely long" battery life when used in audio-only mode.

Aphasia: What we know about the brain condition affecting Bruce Willis