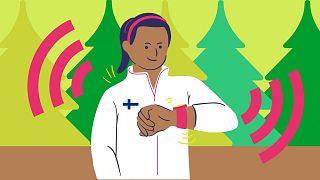 "I ski a couple of times a week from January to March. Mostly in Kajaani, close to my home," she told Euronews Next.

But on March 3, during an outing near her home around 120km from Finland's border with Russia, Larikka noticed the smartwatch she uses to track her exercise routine was behaving strangely.

Instead of the 10km she had skied, the watch claimed she had travelled over 180km. Stranger still, when she checked the watch's accompanying app, it appeared to believe she had been skiing in the middle of Lake Ladoga in Russia, over 400km from where she really was.

"I have used different Polar sport watches for 15 years and track my training regularly. This is the only time I have had this kind of inaccuracy," Larikka said.

Polar, a Finnish manufacturer of smartwatches and heart rate monitors, confirmed to Euronews Next that its customers had reported satellite tracking issues but that it did not know the cause.

"Unfortunately we have no further information as to the root cause at this time. We will continue to monitor the situation to see how it progresses," Polar's chief marketing officer Justin Chacona said.

Finland's smartwatch users aren't the only ones that have reported problems with satellite-based positioning since Russia began its invasion of Ukraine on February 24.

On March 9, national airline Finnair reported encountering GPS disturbances during flights near the Russian Baltic exclave of Kaliningrad, while flights between the Finnish capital Helsinki and the eastern town of Savonlinna were cancelled for nearly a week because of them.

"The plane turned around when the fault was found, in line with normal procedures. When it arrived back in the Helsinki area, all signals were working fine again," Jyri Koponen, a spokesperson for regional airline Transaviabaltika, told the Finnish broadcaster Yle.

The incidents were serious enough for Finland's transport and communications agency Traficom to issue a NOTAM - an official bulletin warning pilots of potential risks to their aircraft - although it was withdrawn on March 14, Finnish officials told Euronews Next.

The recent GPS disturbances in Finland are similar to another spate of incidents in 2018 when authorities blamed Russia for widespread signal jamming during a large-scale NATO exercise in northern Norway.

Technology-wise it’s relatively easy to disturb a radio signal, and it’s possible that Russia was behind it

”Technology-wise it’s relatively easy to disturb a radio signal, and it’s possible that Russia was behind it,” then-Prime Minister Juha Sipilä told Finnish media in 2018.

In 2022, Finnish authorities have been more inclined to reserve judgement.

When asked about reports of GPS interference in Finland earlier this month, current Prime Minister Sanna Marin told Reuters, "if they were caused by outside influence, it would surely be said publicly".

Finland's Ministry of Foreign Affairs confirmed that GPS interference "had concrete effects on civilian flights" but that no aircraft had ever been in danger.

"GPS interference is currently being investigated by the Ministry for Foreign Affairs and other authorities (the Finnish Transport and Communications Agency)," the ministry told Euronews Next via email.

"Further action will be taken if necessary. Finland always takes any action that may put civilian operators and aviation safety at risk in Finland very seriously".

Part of the difficulty in pinpointing the cause of errors in global positioning data is that they can be down to many factors, many of them unintentional.

These can include interference from the Earth's ionosphere, broken equipment or system errors in the Global Navigation Satellite System, or GNSS - the umbrella term that covers satellite-based positioning systems like America's GPS, Europe's Galileo, Russia's GLONASS and China's BeiDou.

"To know this exactly we would need to analyse the signal and its parameters. While it is common that there is intentional jamming during crises, some of the interference is natural or unintentional," said Professor Sanna Kaasalainen, Director of the Department of Navigation and Positioning at the National Land Survey of Finland.

While it is common that there is intentional jamming during crises, some of the interference is natural or unintentional

In June 2021, a number of ships in the Black Sea off Ukraine reported anomalies in their publicly-available positioning data.

In one case, British and Dutch warships on patrol were made to look as if they were approaching the port of Sevastopol in Russian-occupied Crimea.

But a webcam livestreaming shipping activity in the Ukrainian port city of Odesa revealed that both ships were in fact docked at the time, some 300km away from where the positioning data claimed they had been.

"I guess it's a variation of what we see with Facebook and Twitter and social media, in general, being manipulated for different purposes. We need to learn that we can't always trust this information," naval expert Anders Puck Nielsen told Euronews Next at the time.

The difference with the recent "small scale and random" incidents in Finland, Kaasalainen said, is that they were much broader in scope, which makes it harder to identify the cause.

"To cause large-scale interference in both air and ground one would need several high-power antennas to send signals in multiple directions," she explained.

"The signals sent from the ground, which would then affect smartwatches, are likely to be sent from short distances. A signal sent from long distance might not hit the ground because the Earth’s curvature starts to take effect," she said.

A simpler explanation in the case of smartwatch users like Larikka is that their device simply took longer than usual to load its satellite positioning data, leading to anomalies, Kaasalainen said.

For her part, Larikka told Euronews Next she had no idea what made her watch believe she'd been skiing in the middle of a Russian lake.

"What I have heard is that it’s not that difficult to disturb GPS signals. But who is interested in doing this is a mystery to me," she said.