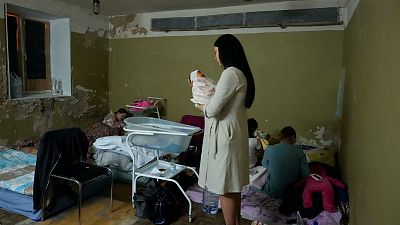 A woman holds her newborn child in the basement of a maternity hospital converted into a medical ward and used as a bomb shelter during an air raid alert, in Kyiv, Ukraine, We   -   Copyright  AP Photo/Efrem Lukatsky
By Natalie Huet  & Naira Davlashyan  •  Updated: 14/03/2022

Ali, a 3-week-old baby boy, has never met his biological parents and is waiting in a bomb shelter in Kyiv for someone to come pick him up.

Born to a surrogate mother in Ukraine, he’s one of dozens of babies stranded in the capital as relentless attacks from Russian forces upend a controversial business in which women bearing life for infertile couples are now trying to escape death.

Paid surrogacy is legal in Ukraine; in fact, the country has for years been one of the world’s most affordable and hassle-free destinations for the practice.

Only heterosexual couples unable to get pregnant for medical reasons are legally eligible for it, however loose oversight and corruption have attracted same-sex couples too.

But Russia’s invasion at the end of February has thrown the cross-border industry into a panic and exposed the conflicting interests of surrogate mothers, the couples whose baby they’re carrying, and the agencies that connect them.

"Sending families into a war zone to be united with the children, it's just really, really difficult

"We've never seen anything worse. This is an absolute crisis," Sam Everingham, whose non-profit Growing Families supports parents who opt for surrogacy, told Euronews Next.

His association has over 10 years of experience working with government and agencies during crises; from a military coup in Thailand to earthquakes in Nepal and airspace closures during the COVID-19 pandemic.

It’s now helping around 100 families who sought to have a baby through surrogacy in Ukraine and are now desperate to safely get their newborns - and their embryos - out of the country.

"Each of these cases is agonising," Everingham said. "We can get people across borders, but this is a whole other level. You know, sending families into a war zone to be united with the children, it's just really, really difficult".

100 babies in a bomb shelter

Ali’s biological parents live in Toronto, Canada, where they tried for over 10 years to have a baby, but failed despite multiple attempts at in vitro fertilisation (IVF).

Three years ago, the married couple decided to pursue surrogacy in Ukraine, where for around €40,000 to €60,000 - half what it costs in the United States - couples can select a mother willing to carry their embryo in her womb and have the baby for them.

By the fifth embryo transfer, Farooq* and his wife could finally celebrate a surrogate pregnancy. A caesarean was scheduled for February 20 but Ali came early, on February 18.

While he spent his first few days in neonatal care, his new parents flew from Toronto with a layover in Istanbul.

But on February 24, Russia invaded Ukraine. Airlines halted all flights to the country and suddenly the couple could no longer reach Kyiv.

The clinic that arranged the surrogacy, BioTexCom, promised to look after Ali in a bomb shelter it secured to keep him and other newborns safe.

"Our baby is in a bunker in Kyiv. He’s in a bunker and we have no way to get to him," Farooq said. "How do I get to that place? I don’t speak Ukrainian, I don’t know the country".

The couple asked BioTexCom to bring their son to Lviv - a city in the west of Ukraine that for now is deemed relatively safe - so that they could pick him up there instead.

BioTexCom confirmed it recommends that parents wait for a safer time to collect their babies, as airstrikes, fuel rationing, and food shortages make it too perilous to be on the move with a newborn in a foreign, war-torn country.

It’s not the first time BioTexCom has had to look after stranded newborns. In May 2020, at the height of the COVID-19 pandemic, when global travel came to a virtual halt, the clinic released footage of rows of babies in bassinets in a Kyiv hotel to draw attention to the problem.

The clinic is now looking after some 30 babies in its bomb shelter and expects to have more than 100 on its hands by the end of the month, BioTexCom legal advisor Denis Herman told Euronews Next.

"Every day we have one, two or three new babies," he said.

Oksana, a 32-year-old Ukrainian surrogate mother, is 39 weeks pregnant with a baby girl she’s carrying for a couple from Bulgaria.

She was staying with her husband and 9-year-old daughter in a Kyiv apartment near BioTexCom’s clinic when Russia invaded Ukraine.

The family spent two days hunkering down in one of the city’s subway stations before fleeing north to Chernihiv.

When that city got bombed too, they fled to their hometown, near the northeastern city of Sumy.

"It's calmer here, we haven't been touched yet, thank God," Oksana told Euronews Next.

"The most important thing for us at this point is to have the baby and survive," she said, adding the family had no plans to move again - for now.

Like most Ukrainian men aged 18 to 60, her husband is banned from leaving the country as he may be drafted to fight.

"We're not leaving by ourselves, I'm not leaving my family. We're united, we're a family and we have to be together until the end," she said.

Everingham, of the network Growing Families, said some couples had been pressuring surrogate mothers to flee to safer parts of Ukraine, or even leave the country for Georgia, where surrogacy is also legal.

"That’s not morally right," he said. "These women aren't chattels. They’ve got to be given the right to make their own decisions, they cannot be forced to move. And the parents and the agencies need to understand that".

We're not leaving by ourselves, I'm not leaving my family. We're united, we're a family and we have to be together until the end"

Some clinics like BioTexCom also say it’s too dangerous to bring surrogate mothers and their newborns to the border with Poland. They warn that if they end up in a country where surrogacy is banned - which is the case across most of Europe - the surrogate mother would be the only one recognised as the baby’s legal parent.

Oksana is waiting it out in eastern Ukraine. She could go into labour any day now as fighting intensifies all across the country.

"Hopefully, it will subside, and I will be able to bring the child to the clinic, hand it over with official documents," she said.

"It's not my baby, it's their baby. It should be with them".

Oksana said she went into surrogacy to pay for an expensive surgery for her father. Now with the war, that’s all up in the air too. Still, despite the harrowing context, she said she had no regret becoming a surrogate mother.

"Not once have I regretted it because people will be happy when they have a baby," she said.

Outside Ukraine, those waiting to finally hold their baby are worried sick, watching in horror the ravages of Russia’s attacks on the country.

The bombing of a children’s hospital and maternity ward in the southern city of Mariupol on Wednesday, with footage of bloodied pregnant women emerging from the rubble, struck a particularly raw nerve.

"Every time I get an email, I'm afraid it's going to be some bad news," Farooq said, adding that his wife had fallen into depression.

He said he had appealed to the Red Cross and other NGOs to help secure safe passage for their son, while the Canadian embassy is fast-tracking a passport for him.

"But the passport is no good if you don't have the baby," he said.

BioTexCom sends the biological parents pictures of their babies to try to reassure them.

The surrogacy clinic is also seeking help to transfer the thousands of frozen embryos, oocytes and sperm samples that belong to its clients to a secured location, possibly in another country.

“There are over 3,000 couples globally who’ve put embryos in Ukraine - embryos that they were hoping would one day be their child

"There are over 3,000 couples globally who’ve put embryos in Ukraine - embryos that they were hoping would one day be their child, often their only child," Everingham said.

"These families are devastated. Will they ever see those embryos again?"

Farooq and his wife also have embryos among the 6,000 that BioTexCom stores in Kyiv. But right now, all they’re concerned about is their newborn son - and how they’ll get to him.

"We are hoping and praying for a ceasefire or that something happens to Putin. I hope he dies or some shit like that. Excuse my language. But you know, that's what we hope for".

How fast Kyiv went from being a prime destination for surrogacy to these parents’ worst nightmare has caught even the most experienced market players off guard.

As a result, "nearly all the agencies never put any contingency measures in place," he said.

The war raging in Ukraine is now redrawing the map of Europe’s surrogacy hotspots, and catastrophic scenarios are cropping up in negotiations over the fine print of contracts.

"We’re already getting lots of parents who are looking at engaging in countries like Georgia who are saying: 'could you put clauses in the contract to tell us what would happen if Russia invaded Georgia?' 'Would we have access to the funds we paid?' 'Would we get refunds?' 'What protection could we have in place?'" Everingham added.

He described these as legitimate concerns: "Even, say, if there was a civil war in the USA, do we know what would happen to a surrogacy contract?"

"These are issues that people doing cross-border arrangements need to consider because we're living in such an uncertain time now".

Greece, where surrogacy is legal too, is also proving another fallback country in Europe.

But like Georgia, it’s small and may struggle to cope with the huge demand from couples turning away from Ukraine, Everingham said, predicting growing pressure on “grey area” countries like Cyprus and Albania, where surrogacy is not regulated by law.

Surrogacy clinics and governments turning a blind eye to the global business have some soul searching to do in this crisis, Everingham warned.

"One of the issues we've seen over the last decade I've been involved in this area is that if one country closes down, the providers just move," he said.

"They find a niche. Because they realise that the desire for infertile couples to have families is huge. It’s hard to stop".

*Euronews Next is not using Farooq’s real name, at his request.