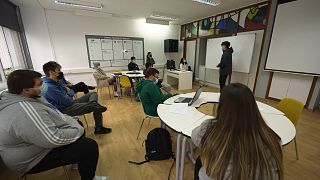 We speak to Spain's Minister for Economy and Digitalization, Nadia Calviño and meet students in Tenerife, where recovery funds are being spent on vocational training.

Laying the foundations of Europe's recovery

Europe’s response to the pandemic crisis was an historic stimulus plan of €806.9 billion (in current prices).

At the heart of it is the Recovery and Resilience Facilityworth €723.8 billion (in current prices) which seeks to help EU countries get back on their feet through investment, creating jobs and building a green and digital future.

Spain is set to receive €69.5 billion of that money - the biggest public investment plan in the country's recent history. So far it has received €9 billion in emergency pre-financing and its first instalment of €10 billion in December 2021.

At the university, you might get a lot of theory but little practice.

In Tenerife, Canarians like Adrián, are learning news professional skills to help them find employment.

"At the university, you might get a lot of theory but little practice. The good thing about vocational training is that there is an option to do internships," Adrián explains.

"If they like the way you work and they need people, they will take you on. How do I see my future after this training? Well, I hope to start working on something related to this. I would like to work in different countries of the world. The US, Germany, England, anywhere, but work in different places," he adds.

While training centres like the one Adrián is at already existed, thanks in part to the European Social Fund, €2 billion of the Recovery Fund money will be dedicated to the creation of 135,000 new vocational training placesacross Spain.

Jorge Rivero Antuña, Director of the CIFP César Manrique vocational school, says the money is already being used to teach technology and business.

“We receive funds from Europe, known as the European Social Fund. That covers 80% of teachers' salaries and training courses for the unemployed and workers. Regarding the resilience mechanism, we have already received money to provide for technology classes, entrepreneurship, etc. We’re hoping we’ll continue to receive funds throughout the course of 2022 and 2023.”

Like many southern European member states, Spain suffers from systemic unemployment, especially among the young. Matching student skills to what employers actually want is seen as one of key ways to fight unemployment.

The rise of tech

Carlos Rodríguez is the founder of Omnia Infosys, a company that helps SMEs and public bodies across the Canary Islands with their digital transformation needs. Despite high rates of regional and national youth unemployment, Carlos says the firm struggles to find the right candidates.

"At the moment, people don’t have the right training to meet what we need now - both in the Canary Islands and the rest of Spain. All the skills we need, people just don’t have them," he explains.

Despite that difficulty Carlos concludes on an optimistic note: "This sector will grow a lot. There will be a lot of demand. We need more and more people with different skills because demand since COVID-19 has been incredible. Growth has shot up by three or four times in the last two years. And, this growth will continue to increase. In fact, in Europe, there are millions of job vacancies in this sector."

To receive its first disbursement of €10 billion, Spain has had to implement dozens of structural reforms, including measures aimed at improving its vocational training ecosystem, and reducing the gender pay gap at work.

Other EU member states are also currently instigating reforms to receive their share of the recovery funds.

For more insight into Spain's national recovery plan, and how the country intends to use the recovery funds to transform its economy, Real Economy spoke to Nadia Calviño, the country's Vice President of the government and Minister for Economy and Digitalization, .

Euronews: "Spain is set to receive almost 70 billion euros. What will it mean for Spain and the Spanish economy?"

Nadia Calviño, Vice President of Spanish Government and Minister for Economy and Digitalisation:

"It is very important for Spain's present and for Spain's future, next generations. Our recovery plan is focussed on four axes: green, digital, social and territorial cohesion and gender equality, driving all our programmes. Digital is going to represent around 30 percent of total investment."

Euronews: These funds come with a set of structural reforms. How tough has been to meet all of those conditions?

Nadia Calviño: "The process has been burdensome and very intense. We were a bit the guinea pigs, we have been opening the process. We have been learning with the Commission on how to implement this unprecedented recovery plan.

Concerning the reforms, we have accelerated them in the course of 2021, now the challenge is to finalise those that are pending in parliament and continue the flow of funds that started already last year."

Spain is a large country, it is a complex country.

Euronews: "Are you confident that there’s the administrative capacity to deliver it?"

Nadia Calviño: "It is a very, very significant challenge for any administration. Spain is a large country; it is a complex country. We have a multi-layered administration. So we have put in place a governance structure and reinforced the mechanisms we had.

We will be launching in the coming weeks some of the most significant strategic plans, for example, for leading the transition towards the electric and connected car.

Euronews: "How much of a difference do you think that vocational training projects will have on unemployment?"

Nadia Calviño:"Vocational training is one of the keys to unlocking a better functioning labour market in the future. Our unemployment rate has dropped to 13.3 percent and this gives us a good basis that together with the structural reforms, notably the labour market reform, and also a very significant investment effort in education, vocational training, lifelong learning, that can allow Spain to finally tackle some of the imbalances that have been dragging growth and prosperity for decades."