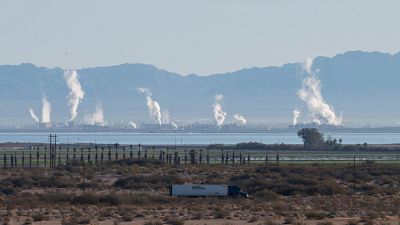 At the edge of a deserted lake in California, the race for ‘white gold’ is on. And the jobs brought by the mining companies could save an area that has slowly fallen into decrepitude.

In this geothermal area, several companies are looking to develop the fastest and most environmentally-friendly technique to extract lithium, a metal used in batteries, electronic devices but also ceramics and glass.

Salton Sea Lake is one of the biggest lithium mining sites in the US. According to the Chief Operating Officer of Controlled Thermal Resources (CTR), one of the companies planning on mining the precious metal, it will become the largest production site globally.

However, extracting lithium is no easy feat as the metal is found deep underground in pockets filled with superhot brine. And to get to it, CTR is drilling a 2,300-metre deep well.

While the company hopes to extract enough to power 6 million EVs by 2024, there is a human cost to the process.

The once buoyant area has suffered from pollution from the lake and high unemployment rates in recent years.

The lake was created by accident when irrigation engineers cut into the banks of the Colorado River in 1905 and its waters have been gradually evaporating ever since.

As the water evaporates, the concentration of salts increases, killing off all of the species of fish that lived here save for one.

"If nothing is done, if there is no intervention at all, the sea will shrink to about two thirds of its size right now or thereabouts," said Tim Krantz of the University of Redlands.

Nearby Bombay Beach, which used to be a resort town known for its fishing and watersports, lies largely in ruins today, its lakefront far from the water.

But what worries scientists like Tim Krantz the most is that the lake contains toxic elements like arsenic, selenium and cadmium in the bedlake and as the water disappears, these would be left to blow into the atmosphere.

"It would be an air quality disaster unparalleled in the world today. These particles are so fine that if you breathe them in they'll perfuse directly into your bloodstream through your lungs,” said Krantz.

“We'll see tens of thousands of increased hospitalizations from respiratory disease, asthma, and some of these particles are associated with leukemia and other types.”

There is hope that mining companies like CTR could revitalise the area by providing new jobs.

The mine is in California’s Imperial State, a region that has struggled with unemployment in recent years, with rates as high as 20 per cent.

But promises of jobs from companies investing in lithium are met with caution by others.

"I believe that the publicity surrounding it is instigated a lot by the companies that are trying to get their foot in the door here at the Salton Sea," said Beau Keeley, a resident in nearby Slab City.