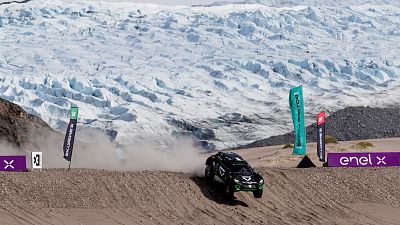 One of the cars taking part in the inaugural Arctic X-Prix, with Russell Glacier in the background. This was the first ever motorsport race to take place in Greenland.   -   Copyright  Zak Mauger/Zak Mauger
By Marthe de Ferrer  •  Updated: 05/10/2021

The fate of combustion engines has been sealed. They’re on their way out, as governments around the world have mandated that petrol and diesel cars can no longer be produced.

Most bans are coming into effect in the next five to ten years (depending on the country).

The obvious successor to our petrol and diesel-fuelled cars are electric vehicles. They already exist in various forms, are continuing to come down in price, and are growing in popularity. At the end of last year, there were more than 10 million plug-in EVs on the road.

Hydrogen vehicles are also an option, but there are currently only two models on the market, with just over 31,000 being driven at the end of 2020. So for now at least, electric cars are the main option for most drivers.

But despite the legislation in place to phase out petrol and diesel cars - which was intended to be the final nail in the combustion engines’ coffin - in 2020 more than three-quarters of new cars sold in the EU were still petrol (47.5 per cent) and diesel (28 per cent).

There are financial incentives in place to entice customers to buy electric vehicles, as well as overwhelming evidence of the damage our cars are causing the planet - yet most people are still choosing the polluting option.

Consumers have reservations about electric cars. A survey by Autolist found that nearly half of people polled wouldn’t buy an EV because of its range on a single charge - despite the fact that many models now offer 400-480km on a full battery.

A survey by Autolist found that nearly half of people polled wouldn’t buy an EV because of its range on a single charge.

“There are more EVs available today than ever before, but that hasn’t done much to change consumers’ perceptions of them,” says Autolist analyst Chase Disher.

“The misconceptions that electrics faced at the beginning of this decade are still a major impediment to their success right now.”

This is where Extreme E comes in. The off-roading cousin to Formula E, Extreme E is an all-electric off-road racing championship that’s helping shift the narrative around electric vehicles.

The racing series has already held three stages, in Saudi Arabia, Senegal, and most recently in Greenland. Nine teams are competing this year - its inaugural season - with a male and female driver in each.

Unlike Formula One, every team drives the same vehicle: the Spark Odyssey 21 SUV, manufactured by Spark Racing Technology with a battery by Williams Advanced Engineering.

Enormous names in the world of motorsport (and beyond) are involved, including Lewis Hamilton, Jenson Button, and Nico Rosberg - who all own a team - and driving legends like Sebastian Loeb and Carlos Sainz who are actually behind the wheel.

It was the impressiveness of these participants that convinced Loeb, the most successful driver in World Rally Championship history with nine world titles under his belt, to sign up as part of Lewis Hamilton’s X44 team.

“When I saw all these names like my boss, Lewis [Hamilton]; [Nico] Rosberg; Carlos [Sainz] coming into this discipline, I was thinking ‘maybe it’s the right way to go!’” he laughs.

“I was interested to discover this new discipline and now I’m here and I enjoy the drive.”

Enormous names in the world of motorsport (and beyond) are involved, including Lewis Hamilton, Jenson Button, and Nico Rosberg.

But at first, Loeb was unsure about electric cars. He felt hesitant, as someone who has built an extensive career with combustion engines, he was used to responding to the noise of the car, the traction, the grip.

“I was a bit afraid to have absolutely no feeling with the car,” he says, “but it’s not the case, we have a really good feeling in our car. The feeling between the driver and the engine is something that feels really natural.

“You still have the noise of electric, that gives you information of the wheelspeed, of the grip of the traction you have.

“It’s really enjoyable to drive an electric car, you have a lot of torque,” he adds, “that was not always the case in the past.”

Despite a few technical issues in the qualifying round, the final race in the Arctic X-Prix was undeniably impressive, showcasing electric cars in a truly extreme capacity.

“That’s an important component, the market perception and demand for electric cars. We want something that’s cool and shows that you don’t have to compromise on other factors.”

Innovating for the future

Although Extreme E demonstrates clearly that perceptions about electric cars are largely outdated, the series is still facing its own set of technical issues.

From an everyday standpoint, the championship clearly shows that EVs are capable of handling difficult terrain, reaching impressive speeds, and being raced by the best drivers in the world.

From an everyday standpoint, the championship clearly shows that EVs are capable of handling difficult terrain, reaching impressive speeds, and being raced by the best drivers in the world.

But there are still frustrations when it comes to ability. In the second qualifying race in Greenland, three cars didn’t finish due to different performance issues. There were similar issues the next day in the Crazy Race, where teams were hampered by battery malfunctions.

The course was eventually shortened to try to counter these hindrances, resulting in a dramatic final - but the frustration at the cars’ capacity was a heavily discussed topic on site.

The Extreme E team don’t try to hide this though. Founder Alejandro Agag, who is also the founder and CEO of Formula E, is completely transparent about the limitations of his vehicles.

“[It’s] touching a weak spot for me because I’m not happy at all with our batteries,” Agag says, “and that’s saying a lot because these batteries are probably the best batteries in the world for what they do.”

For Agag, batteries are the component holding back the transportation revolution the most. He compares it with Moore’s law - the principle that the number of transistors on a microchip doubles every two years, thereby making computers faster, while the cost is halved.

“The dream for me will be that there was a kind of Moore’s law for batteries...My telephone is today more powerful than a supercomputer that was bigger than this room - and this has happened very fast!”

Batteries, on the other hand, have not developed at the same rate. Agag says that instead of doubling capacity every 18-24 months like microchips, they improve by just two or three per cent across the same period.

“That is the big obstacle for mass adoption of electric transportation and electric technology,” Agag continues. “Maybe someone will crack that problem. Maybe.”

Batteries, on the other hand, have not developed at the same rate. Agag says that instead of doubling capacity every 18-24 months like microchips, they improve by just two or three per cent across the same period.

But Extreme E (and its more traditional cousin, Formula E) are at the forefront of pushing this technology forwards. Agag sees these championships as “a platform to test” batteries on, thereby leading the development of electric vehicles.

“Racing provides the ultimate R&D [research and development] and capability to build these things to a top level,” he says.

“I think we push the movement forward at a very fast level compared to a manufacturer...it just elevates everything a lot faster.”