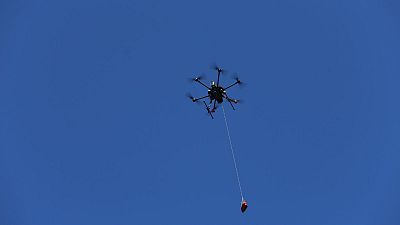 A drone delivered a defibrillator to help a man suffering from cardiac arrest.   -   Copyright  Everdrone
By Ian Smith  with Reuters and AP and AFP  •  Updated: 14/01/2022

An autonomous drone helped save the life of a man who suffered an out-of-hospital cardiac arrest in Sweden, it emerged this week.

The 71 year-old man was shovelling snow in his driveway in the Swedish city of Trollhättan on the morning of December 9, 2021 when the incident happened.

In a stroke of luck, a doctor happened to pass when the cardiac arrest hit.

“I was on my way to work at the local hospital when I looked out the car window and saw a man collapsed in his driveway”, Dr Mustafa Ali told Everdrone.

“I immediately understood that something was wrong and rushed to help. The man had no pulse, so I started doing CPR while asking another bystander to call 112 (the Swedish emergency number). Just minutes later, I saw something flying above my head. It was a drone with a defibrillator".

Dr Ali was able to perform life-saving treatment on the man who has since fully recovered.

The time from when the alarm was raised until the defibrillator was safely delivered at the doorstep of the incident address was just over three minutes.

The drone is a partnership between the Karolinska Institutet - Sweden's largest medical university - together with the national emergency operator SOS Alarm, Region Vastra Gotaland and Everdrone.

In cases of cardiac arrest, time is of the essence with each passing minute reducing the chance of survival.

“This is an excellent real-world example of how Everdrone’s cutting-edge drone technology, fully integrated with emergency dispatch, can minimise the time for access to life-saving AED equipment”, said Mats Sällström, CEO of Everdrone.

The concept car, called the BMW iX Flow, uses electronic ink technology normally found in e-readers to transform the car's exterior into a variety of patterns in grey and white.

"So we took this material - it's kind of a thick paper - and our challenge was to get this on a 3D object like our cars".

When stimulated by electrical signals controlled by a phone app, the material brings different pigments to the surface, causing the car to take on a different shade or design, such as racing stripes.

In the future, the changes would also be controlled by a button on the car's dashboard or perhaps even by hand gestures, Clarke explained.

No energy is needed to maintain the colour the driver selects, according to BMW.

Though the vehicle displayed at CES could only alternate between grey and white, the technology will be expanded to cover a spectrum of colour, according to the German carmaker.

Sweden creates agency to combat fake news ahead of election

Sweden, which is holding a general election in September, has joined France in creating an agency to combat disinformation.

The mission of the Swedish Psychological Defense Agency is to “defend our open and democratic society and free opinions by identifying, analysing and responding to inappropriate influences and other misleading information directed at Sweden or Swedish interests”.

The agency, which was set up on January 1, has departments that respectively “identify, analyse and respond to the impact of undue information influence and other misleading information” and “to develop and strengthen society’s overall capacity for psychological defense".

The government authority, which didn't name any countries it suspects of participating in disinformation campaigns, said it "will provide support to the population, agencies, municipalities, the media, voluntary defense organisations and civil society in general, as well as working for increased coordination between these actors”.

However, it added that a “foreign power exerts influence on Sweden in the long term”. The agency didn’t identify any country involved by name.